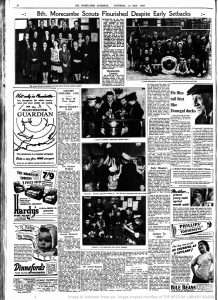 The 8th Morecambe Sea Scouts are in a dilemma. They have a fine club room, boats, and a good group of boys, but lack the main essential, a Scouter to take charge. This was revealed at the annual meeting of the troop on Monday night, when an appeal was made for any ex-Scouter or other gentlemen, willing to take on the work, to communicate with Mr. Phethean, 23, Bold Street, Morecambe.

At the meeting, held in the home of treasurer Mr. McDowell, Euston Road, all the officials were re-elected with the exception of the secretary, Mrs. Barker, who resigned and in whose place Mrs. Turner was elected.

Mr. McDowell reported a good balance sheet despite various expenses incurred with the Alpha. The Cub pack was stated to be very satisfactory, its members attending in good numbers regularly.