By clicking on one of the locations below you can find information about the Groups within Lonsdale District.

Each pin represents either a Scout Group or Explorer Scout Unit (ESU).
Click on a pin in your local area and zoom in to find the Groups closest to you.

If you think Scouting’s just about knots, woggles and big shorts, then be prepared to be surprised. It’s how Richard Branson, Barack Obama and David Beckham got their start in life. Every year we help 400,000 young people in the UK enjoy new adventures; to experience the outdoors, interact with others, gain confidence and have the opportunity to reach their full potential.

Who are our young people?

Scouting encourages young people from all backgrounds to have self-belief and a voice. It helps them develop physically, intellectually, socially and spiritually. We call this ‘everyday adventure’. They just call it fun.

Who are our volunteers?

Our adults are from a variety of different backgrounds. All our leaders are volunteers, and all Scout volunteers are unpaid and the majority have a full-time job and family. Here are some other key facts:

Scouting in Lonsdale is a modern, forward looking, co-educational youth movement for the 21st Century.  With around 1150 members across the District led by a dedicated team of adults, Scouting continues to offer a progressive programme of  interesting, exciting and challenging activities to young people in the 6 – 25 year old age range.

Approximately 80% of young people across the District live less than fifteen minutes drive from their nearest Scout Group – so there will be a Scout Group close to YOU.

Click here to find the nearest Group to you in West Lancashire Scout County.

Geographically, Lonsdale District covers the northern area of the administrative County of Lancashire.

The District consists of 24 Groups and 8 Explorer Scout Units and is a part of West Lancashire Scout County.

The red rose, originally a badge of the Earls and Dukes of Lancaster, and the device of the Lancastrian faction in the Wars of the Roses, has become the County emblem and is the principal feature of the County coat of arms.

Lancashire’s red rose was the badge of Edmund Plantagenet, second son of Henry III, and the first Duke of Lancaster. The red rose is the French ‘rosa gallica’ or ‘rosa officialis’ introduced into England, perhaps about the time of the Crusades. Henry II’s wife, Queen Elinor, who was French, was compared with the exotic French rose. The white Yorkshire rose is the ‘rosa alba’ and it was always the symbol of the House of York. When the Wars of the Roses ended, the (Welsh) Tudors merged the red and white roses to create the Tudor rose.

And, perhaps, the argent ground behind the gateway represents the silver waters of the River Lune, anciently Loyne, from which dale the District takes its name, and which passes through a large portion of it.

Or even the silver waters of Morecambe Bay . . .

John of Gaunt (or Ghent), Duke of Lancaster, was the fourth son of Edward III. and his queen Philippa, and was born at Ghent (Belgium) about 1340. He married Blanche, daughter of Henry, Duke of Lancaster, and was created Earl of Derby and Duke of Lancaster. He took part with his brother, the Black Prince, in his Spanish expedition; married soon after Constance of Castile, and assumed the title of King of Castile; invaded France in 1373, and marched unopposed from Calais to Bordeaux; and succeeded his brother as Governor of Gascony.

In 1380 he invaded Scotland, and during his absence his palace at London was attacked and burnt by the insurgents under Wat the Tyler. He afterwards made an attack on Castile in alliance with the King of Portugal; but closed the war by marrying his daughter to the son of the King of Castile; and returned to England in 1389. In the following year Richard II. gave him the Duchy of Aquitaine. By his first wife John of Gaunt was father of Henry IV. He married as his third wife Catherine Swynford, and died in 1399. He had distinguished himself as the firm and powerful protector of Wickliffe. 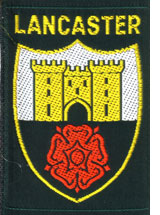 Original badge made from the winning competition design by Russell King of Orpington, Kent for a District Badge for Lancaster in 1972.