Together with the Woodland

The buildings are substantially built of stone and comprise Six-bay Timber Shed, SAWMILL fitted with bench, and Workshop over, power being supplied by a water turbine.

RIGHT OF WAY. There is a general right of way for all purposes reserved for the benefit of this Iot, over Lot 7, along the existing track or route. 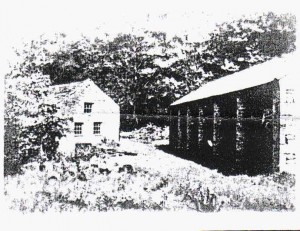 Crossgill is the next mill downstream (SD 558 623). The early history of the site is not known but it may have been a medieval corn or fulling mill and it is listed as a corn mill in 1780. The last miller was William Bibby, who was recorded in the landowner’s notebook, one Mr. Faithwaite, on 13th August 1835 as paying five pounds rent of the mill. The mill was converted for bobbin manufacture circa 1840 and the site was bought with the rest of the Faithwaite estates in Littledale by the Reverend John Dodson in 1843.

Once there were three buildings on the site, including a small dwelling and the three-storeyed stone and slate-built mill. This initially had an internally situated breast shot wheel, fed from a wide-ponded head race that was supplied from a weir just below Fostal Bridge. A large open sided coppice wood shed, with round pillars and a stone slate roof, built circa 1840 for the bobbin operations, adjoined the mill. Later, during the bobbin manufacturing period, a water turbine was fitted, which was still in use when the mill was converted to a sawmill after 1890. The site was sold in 1945 as a ‘sawmill with workshop and six bay timber shed’.

About 1850 the bobbin mill was being run by one Jonathan Walling, who is listed in the 1851 census at nearby Birkett House. He ran the mill with over a dozen ‘apprentices’, who all lived in. In 1866 George Savage made bobbins here the mill was closed by 1893. It was offered for sale as part of Littledale Hall Estate at the Alexandra Hotel, Lancaster, on 8th June 1945. The site was taken over by the Scouts some 20 years ago and the mill has since been taken down to its foundations. The short tail race survives, but the ponded race is filled and the weir has gone. The only surviving building is the coppice shed, which is, now re-roofed with Welsh slates.