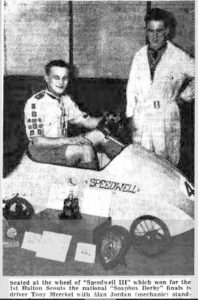 TRAVELLING at 21.9 miles per hour, “Speedwell III” built and proudly owned by the 1st Halton Boy Scouts, sped to victory in the National finals of the Boy Scouts Soap box Derby at Weston-super-Mare on Saturday.

At the wheel was Senior Scout Tony Merckle** who recently won the North Western Championship in the same machine at New Brighton. Tony, an 18-year-old bank clerk of Kingsdale Road, Lancaster, handled his machine with the skill and judgment of a veteran racing driver. Tony carried off four awards on behalf of his troop. For winning the championship he won a polished wood case containing lightweight camp equipment and £10 in cash; the Vauxhall Speed trophy for the car recording the fastest speed of the day; the Haydn Dimmock trophy for the car showing the greatest ingenuity in construction; and a special prize presented by Silver City Airways Ltd. of a free flight from Lydd (Kent) to Le Touquet (France).

Although final details of the last prize are not yet certain, it is expected that Tony, accompanied by his mechanic, will take “Speedwell III” to France where a demonstration soap box derby will be staged.

Among the thousands of spectators who watched the Mayor of Weston-super-Mare (Coun. H. J. Holcome) present the prizes was a representative party of 40 scouts, cubs, guides and parents who had travelled from Halton on Friday night.

“Speedwell III” was constructed by the Halton boys under the guidance of  their skipper, Ray Ackerman *. It was built of tubular aluminium with a covering skin of Lancashire cotton doped over with cellulose paint which gave it a metal-like appearance and almost no weight. It was powered by the normal three speed cycle gear, but with twin driving chains.

Competing with the Halton boys on Saturday was “Bomb II” owned by the 1st Arnside troop, who for the past three years have been Halton’s nearest rivals.

Saturday’s success has spurred both troops on to greater ambitions. Looking forward to building a new car for the 1957 events, Halton would like to have more competition from other local troops.

Footnote: The late F. Haydn Dimmock who for 36 years was editor of “The Scout,” originated the soap box derby in Britain. He decided that the cars should be built to fixed specifications, should be pedal driven and built by the boys themselves. In America, the cars are pushed down an incline only and have no means of propulsion.

** Geoffrey Anthony Martyn Merckel was born 1938 in Lancaster, the third son of Arthur H. Merckel, born 29 Jun 1903 in Greenwich, and Annie Dickinson. Arthur was in the Royal Marine Artillery 6 Jan 1921 -28 June 1933.
In 1939 the family is living at 11 Kingsdale Road, Lancaster. Arthur’s occupation is given as Stabilisation Process Cellulose Acetate.