The Crew was founded c. 1961 with Dennis C. Brierley being the Rover Scout Leader.

The Crew was nicknamed “the Shrimps”, coming from Morecambe, and had a rather garish necker for the time, which was gold lamé, with a red corded edge and a pink (naturally!) shrimp embroidered on the point.

The Advance Party Report of 1966 condemned Rovers to oblivion in the UK, although the section still exists in many countries.

First founded as Deep Sea Scouts in September 1961, the Crew obtained an initial membership of nine Rover Squires at a series of meetings with the L.A., the D.C. and fellow Scouts on the pros and cons of a ‘District Crew.’ The founder members were granted permission to proceed with their planning.

We were offered a ‘Caravan Den’ which we thankfully accepted, and transported this to a plot of land owned by the Heysham Methodist Church, another offer for which we have been very grateful.

Our first public appearance was at the St. George’s Day Parade, Sunday afternoon, April 29th 1962. On the Sunday morning 4 of the Crew were invested as Rover Scouts at the St. Peter’s Church, Heysham.

Our first act of service was to hold an Indoor Camp-Fire Evening at the Church of the Ascension Hall, Torrisholme, on Friday, 18th May, attended by all sections of Scouting in the district. 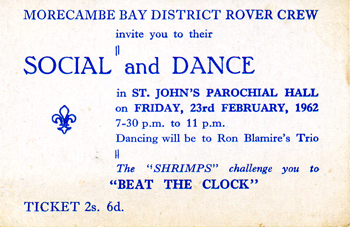 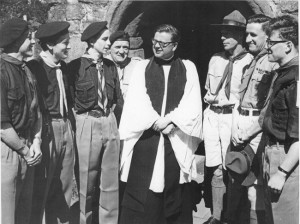 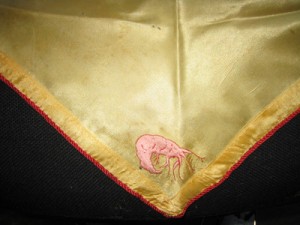