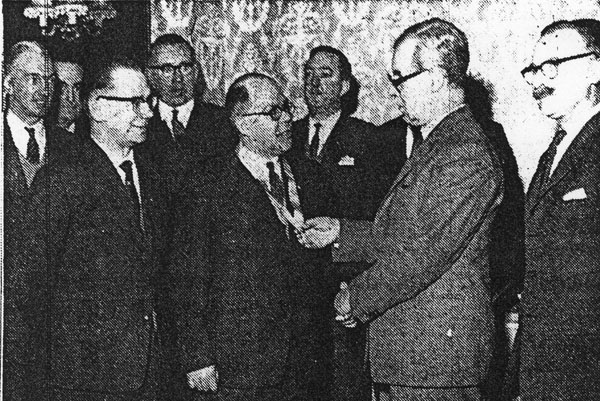 A TROOP CREATED IN A CASUAL WAY

FORMER members of the 13th Lancaster Group renewed acquaintance at a dinner at the Castle Hotel on Saturday night. The company, numbering about 50, spent an enjoyable time together re-living many happy experiences of past associations in the history of the Group, which celebrates its 25th birthday this year.

How The 13th Was Created

Group Scoutmaster Frank R. Hayton, who presided, referred to the long history of the 13th, and mentioned the interesting story of its foundation which was also recounted to me the other day by Mr. J. S. Kinloch. It seems that one afternoon in 1924, Mr. Linloch (sic) was at Giant Axe watching a football match in company with fellow members of the Presbyterian Church, the late Messrs. C. Smith, W. Hoyle and the Rev. J. M. R. Dale. In the course of conversation the last named suggested it would be a good thing to have a Scout troop, and one of the others turned  to Mr. Kinloch (who had already had Scouting experience with the 4th Lancaster) and named him as the first Scoutmaster. So the 13th had its roots  in the Presbyterian Church  as a sponsored Group and in the following year (1925) the original colours were dedicated there.

Except for a short break, according to Mr. Hayton, the 13th Lancaster had functioned until the present day. A Cub Pack to implement (sic) the Scout troop came into being in 1926 and a Rover Crew to complete the Group was formed three years later. By then they had passed from their original sponsors to become an ‘Open’ Group (without attachment to any supporting body), the Scouter-in-Charge being Mr. G.F.W. Mallam (Malham).

All Happy At H.Q.

Mr. Hayton referred to the long tenancy of the Church St. headquarters and to the incalculable benefits enjoyed there through the courtesy of the “Lancaster Guardian and Observer” – a happy state of affairs that still continues.

Another notable acquisition during the passage of years was the country Den, the “Mecca” of the Rovers, a kindness bestowed upon them by Comdr. and Mrs. Gaisford*. In conclusion, Mr. Hayton mentioned the Group’s achievements in the swimming world when for many years they carried off the Local Association swimming shield at the annual galas. He was glad to say that the Group was flourishing again and making a good post-war recovery.

* Commander Richard Lindsay S. Gaisford RN was born 1905 in Ulverston. He married Cecily Margaret Denis De Vitre, younger daughter of Colonel and Mrs. Percy T. Denis De Vitre of Gresgarth Hall, Caton 16 December 1933. The land on which the den was located must have formed part of the Gresgarth Estate.

County Commissioner J. Dodds Drummond, who was introduced by Group Scoutmaster Hayton, said he was pleased to see so many Old Scouts, and that the 13th Lancaster were to start a branch of the B.P. Guild.

Scouting was on the up-grade. He had just come back from attending the Cumberland County meeting where excellent progress had been reported and it was the same everywhere, the census figures had never been higher for both Scouts and Scouters. The growth was largely due to what they, the old Scouts, had done for the movement in their time. The B-P Guild was not an attempt to entice them back as active Scoutmasters, nor to any participation in Group organisation. The Groups themselves were well able to take care of that side themselves. Naturally, they would be interested in the Group and the fact that they were would be a big encouragement for the boys. It was extraordinary how many people one came across who had at some time or another “taken” the Scout Promise or been associated in some way with Scouting.

The Guild had been formed to bring together all former Scouts to carry Scouting principles into everyday life. What a difference it would make to the country, observed the County Commissioner, if the latent Scouting within them came to the surface and found conscious expression in everything they did. The country needed honesty and Scouting principles. Only the previous night, a business man had remarked to him that “Scouting” had got all the answers. It seemed true.

Scouts Do The Right Things

Week by week Headquarters circulated a news bulletin to the Press and regularly it recorded gallantry awards to Scouts. Invariably it was they who had kept their heads in a crisis and done the right thing while others hesitated, or watched. It seemed natural to the Scout to do the right thing by virtue of his training and he visualised the Guild as a gang of chaps who in a moral crisis did the right thing because it was right. He was a firm believer in tradition and he encouraged them to remember their Scouting days. As members of the Guild he asked that they should carry on that tradition  – the fine tradition of the 13th – about which they had heard so much that evening.

The purpose of the Guild then, was to keep alive among its members the spirit of the Scout Promise and Law and to carry that spirit into the communities in which they lived and worked. “Believe in Scouting; believe in your country; make it a better place; be a Scout wherever you are,” concluded Mr. Drummond.

Toasts to the King, the Chief Scout, the Boy Scout Association and the 13th Lancaster Group were honoured.

Messrs. R. Yates (Chairman), W. Oakes, N. Edmondson and J.E. Nicholson (secretary) who had carried out the preliminary arrangements for the function were unanimously elected as the Guild Committee for the ensuing year.

Community singing, with Mr. Stephens at the piano, and a monologue given by Mr. C.H. Pyke, concluded the evening. – AKELA