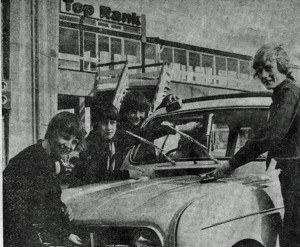 A SMALL Village Scout Troop has hit back at inflation – – with the help of a huge national business firm. The 1st Forton Scouts made over £300 during Job Week, washing wlndscreens at the motorport which mushrooms over their headquarters.

The Troop’s star washer was 11-year-old Alex Peil of Bay Horse, who worked so hard that he earned £50 — all by himself.

But the shock of the seek went to Patrol Leader Colin Twiname, who, on Friday found that the car he was cleaning was driven by Lord Maclean, Chief Scout of the Commonwealth.

The Chief paid handsomely for the job, congratulated the 1st Forton on their appearance and good manners, and gave Colin a signed postcard of the motorport, with the message ‘Job well done’.

There was a bitter biting wind as the Scouts, working in shifts in the charge of an adult, manned the exposed car parks from nine in the morning to six at night. Hands were frozen, but would have been been even more chapped had not the sympathetic Top Rank staff supplied buckets of hot water for the washing operation.

“We are most grateful to the management for letting the boys work at the motorport,” said Group Scout Leader Tess Pickford. It cost over £800 to run our Group last year, and I’m thankful the boys have this chance to earn so much for themselves.

During the past four years, the 1st Forton has raised some £1500 at their local motorport. Not all this money has been used for their own funds — they support other charities. Last autumn raising almost £100 for the RNLI.

Over this Easter while some Scouts have been working at “mushroom tower,” others have been busy in the village below, like the Cubs, asking householders for Jobs.

Local people have, as usual been most generous, and we expect the final count to be around £400,” saId Mrs Pickford. This result has only been gained by a week of hard work by the Scouts, Cubs, their leaders, parents and friends. But as young Alex said, at the end of one shivering day: “It’s better than staying at home just watching TV.”