MR. T. H. Helme, of Springfield Hall, Lancaster, son of the late Sir Norval W. Helme, and District Commissioner of the Boy Scout movement, has been requested by the County Scout Council to take the North-West Lancashire contingent to the Boy Scouts’ International Jamboree near Budapest, which opens on August 2nd for a fortnight.

The camp site of 700 acres  will be situated in a park at Godollo. a former summer residence of the Kings of Hungary, about 17 miles from Budapest. The British contingent expected to number over 2,000, will leave England by four different routes on July 30th, and arrive on August 1st with tents and equipment.

The North-West Lancashire contingent is to include three Scoutmasters and 41 Scouts, and 10 Rovers from Lancaster, Morecambe and Heysham, Preston, Blackpool, Fleetwood, Grange-over-Sands, Ulverston, and Barrow-in-Furness.

In conversation with a “Lancashire Daily Post” reporter, Mr. Helme mentioned that it was hoped to put up a decorative gateway for the North-West Lancashire section of the camp.

“As representatives of the County Town,” he said,”we are taking out our Lancaster coat-of-arms, along with two others. Those who recall the jamboree at Arrowe Park, Birkenhead, to celebrate our coming-of-age four years ago, will have a good idea of the vastness of the organisation. The camp site in that case extended over 450 acres. The one at Godollo will occupy 700 acres.

At the conclusion of the Arrowe Park jamboree the final scene took the form of a vast cart-wheel, with Lord Baden Powell at the hub. Along each line of Scouts he passed a golden arrow as the Scout symbol of peace. The local authorities have chosen as the emblem for the next camp the miraculous deer of Hungarian legend which led the warriors of old to new camping grounds, and brought them luck.

The camp opens with a march past the Regent of Hungary and Lord Baden Powell. A novel feature will be a flying camp, with displays of gliding and model aeroplane exhibitions. There will be jolly camp fires with scenes and songs in many languages, an illustrated daily camp paper in several languages and a theatre to seat from 3,000 to 4,000.

“There will, of course, be careful provision for spiritual needs, and each contingent will have a ‘cousin’ or ‘vetter’ attached as interpreter.

Above all, we shall experience the joyous spirit of camping, the opportunity of improving our knowledge of what Scouting stands for, and the exchange of ideas. It is a wonderful opportunity.

“It has to be remembered that on this occasion we shall be included amongst the foreigners, and other nations will largely form their ideas of British Scouting from what they see of us.. Therefore we must keep the standard high – especially so because the movement started here.

“It will be a veritable League of Nations – and, I venture to add, an effective one. What the world needs to-day is good citizens, with trained minds in healthy bodies, and the ‘good turn’ disposition.

“The cost will be somewhere about £16 per head. Multiplied by 55 it has meant a great effort to raise £880. The Rovers and Scouters pay for themselves. To help in raising funds the boys of the Lancaster Grammar School are kindly giving three plays next week.

“I am anxious to see more Scoutmasters starting new troops. The boys are there, and I am particularly thinking of those boys who, in the next year or two in increasing numbers – the result of the post-war increase in the birth-rate – will be leaving school and, in many cases, have no job to go to.

“Good-will is not lacking, but it is too passive. I want to see more of the ‘will’ in it – the will to give the little fellows a chance.”

NORTH-WEST Lancashire Scouts, who left a week yesterday for the World Jamboree in Hungary, had a very pleasant journey out.

The train from Ostend picked up two small parties of Belgians at Malines, bringing the number of the party to about 550. Belgium was crossed during the night, and the whole of Monday until 9 p.m. was spent in Germany, the first part being up the beautiful Rhine Valley, after having breakfast at Cologne.

The journey across Bavaria was noteworthy for the very cordial reception of the train, and when it drew up at Wurzberg a large number of boys and girls were on the platform. Some of the boys beat drums, and the girls threw large quantities of flowers into the train.

Dr. Wolf the local leader of the Nazis, (speaking in German) extended a hearty welcome to the British Scouts to Germany, and wished them a pleasant journey.

Austria was crossed during Monday night and the train arrived at Godollo at 8 45 a.m. on Tuesday. That day was spent in fixing up the camp and decorating it.

As a camp unit consists of 35, the North-West Lancashire party of 55 was divided, 32 scouts and three officers (Messrs. Fitchie and Fazackerley, of Preston, and Guy, of Ulverston) forming the Narwhal Troop, Mr. Helme and 10 Rover Scouts going to the Moose Rover Crew, and nine scouts from Ulverston and Grange going to the Falcon Troop.

In the great march past at the opening of the jamboree on Wednesday, the Narwhal Troop were fortunate in being placed in the leading section of the English contingent, and came in for the very wonderful ovation the British Scouts received.

Camping conditions are pretty much the same as in England, but the food slightly different, though good and plentiful. The scouts are thoroughly enjoying themselves, fraternising with Hungarians and others, and getting a great deal of fun in trying to make themselves understood.

Extract from the Minute Book of the Morecambe & Heysham & District Local Association:-

“Arising out of the Minutes, Mr. Sly reported that the Jamboree Selection Committee had met, and after meeting the candidates had decided to send four Scouts instead of the original three. The four picked were:
Knowles – 1st Mcbe.
Sutcliffe & Whittaker – 3rd Mcbe.
Harling – 5th Mcbe.” 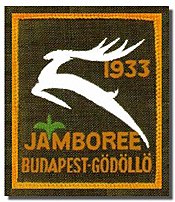