ONE of the highest awards in Scouting – the Queen’s Scout Badge – was presented to 17-year-old John R. Hodson of 6 Needham Avenue Morecambe, on Friday night during a ceremony at St. Mary’s School, headquarters of the 13th Morecambe & Heysham Scout Group, of which John has been a member since he was a Wolf Cub. The badge, together with a certificate personally signed by the Queen, was presented to him by Mr. M. Melling, District Commissioner. John’s Scoutmaster is Mr. F. H. Middlebrook.
To win the award John had, in addition to an exemplary character assessment, to demonstrate his proficiency and initiative in many ways. These included rope bridge building and the completion of a two-day hike carrying a full pack. Starting point for this was Levens and the route, which had to be negotiated by map references, lay over Whitbarrow Scar. The hike continued overnight.
Educated at St. Mary’s School and at the Lancaster and Morecambe Technical College, John has worked for the past two and a half years in the colour department of Jas. Williamson and Son Ltd. 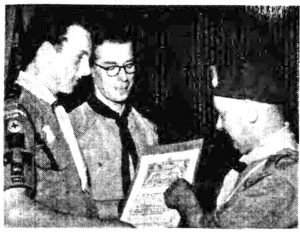 In picture John shows his certificate to Mr. Middlebrook. District Commissioner Melling is in the centre.