According to Bill Thompson’s account Robert Bowker had been a member of the 4th Lancaster Wesley Troop in the early days. In the WW1 Scout Roll of Honour the Headquarters Gazette Reference: May 1917, pg 108 lists him as “Late Assistant Scoutmaster 4th Lancaster Troop.”

In the 1911 census he is living with his parents at 32 Dumbarton Road, Lancaster and worked as a Linoleum Warehouseman. His father is a School Attendance Officer.

Records show that he was killed on 18 March 1917, age 22, and is buried at Vlamertinghe Military Cemetery, West-Vlaanderen, Begium grave no. VI C 12.

Extract from the War Diary of the 1/5 Battalion (courtesy of the Regimental Museum):

Battalion move to CANAL BANK to relieve 1st/4th King’s Own.

Lancaster Guardian March 24, 1917
LOCAL WAR ITEMS.
Lce-Corpl. R. Bowker (Killed).
Much sympathy is expressed with the family of Mr. William Bowker, of Dumbarton-road school attendance officer for the Lancaster Corporation, who on Thursday morning received the tidings that his eldest son, Lance-Corpl. Robert Bowker, King’s Own, was killed in France on the 18th inst. The sad news was conveyed in a sympathetic letter from Capt. W. Harriss, who wrote: “It is with the deepest regret that I have to inform you of the death of your son,
Lce. Cpl R. Bowker, of this regiment. He was struck in the throat by a shrapnel bullet about half-past eight this morning, and died at once. I don’t think he suffered any pain at all, which is some consolation.

Your son had been employed in the orderly room for some time, and had proved himself a most good, efficient, and
willing soldier. In addition to his  usefulness as a soldier he was a splendid boy, and one whom we could ill afford to lose. On behalf of the Commanding Officer, officers and men of the battalion I offer you my sincerest sympathy in
your great loss.”

Acting Adjutant W. S. Macfarlane wrote expressing his sympathy, and adding ” I have been in constant association with your son, who was always cheerful and a willing worker, and to-day we have missed him very much indeed.”

Further details are supplied in a letter from one of deceased’s pals, Corpl. J. T. Price, who writes: “He was sitting near the entrance of the dug-out, writing, when a small shrapnel shell burst outside. One of the bullets caught Bob in the right-hand side of the neck, severing the jugular vein. He jumped up and ran outside. When we got to him he was lying in the trench and quickly expired. He suffered no pain, so far as I could see, and his face was calm when he passed away.”

Lance-Corpl. Bowker, who was 22 years of age, was an old boy of Christ Church School, and prior to the war was in the employment of Mr. A. H. Mansergh. He enlisted in the “Pals” in September 1914 and went with them to France.
He has been with the Fifth through all their engagements, and was considered one of the fortunate ones, having never previously had a scratch. His younger brother, Pte. W. E. Bowker, is in the Army Ordnance Corps.
Lancaster Guardian March 31, 1917

Lce-Corpl. R. Bowker (Killed).
There has been a wide-spread expression of sympathy with the family of Mr. William Bowker, of Dumbarton-road, whose eldest son, Lance-Corpl. Robert Bowker, King’s Own, was as we reported last week, killed in France on the 18th inst. Lance-Corpl. Bowker,  who was 22 years of age, went with the “Pals” of the King’s Own to France, and  though he had been through much severe fighting had escaped without a scratch until the fatal shot on the 18th. He was a young man of exceptional attainments, and looked forward to a bright career. 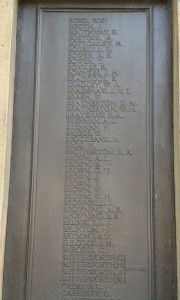