Morecambe Sea Scouts this morning left the Central Pier for the Jamboree to be held at Blackpool. They are taking with them the flag Sir Henry Segrave presented to their Scoutmaster at Windermere, just before he went out to his death. This is the flag which was carried 100 miles an hour on the Wednesday night. 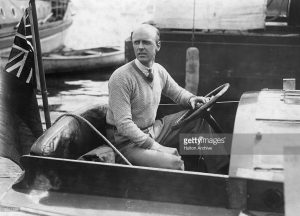 A few months after receiving his knighthood, on Friday 13 June 1930, Sir Henry Segrave unknowingly captured the water speed record driving Miss England II on England’s largest natural lake, Windermere. In a follow-up run the boat presumably hit a log and capsized, killing Miss England’s mechanic, Victor Halliwell. Segrave’s unconscious body was recovered, and taken to a hospital. He regained consciousness for a moment, was informed that he had indeed broken the record, then died a few moments later of lung haemorrhages.