“Scouting is not a boys’ club, or somewhere to send them to keep them off the streets, it is a movement to build good citizens, and I imagine Morecambe wants them as much as any other town in the country,” said County Commissioner J. Dodds Drummond at the 5th Morecambe scouts’ bring and buy sale, organised by the parents committee, and held at the headquarters, St. John’s parochial hall on Wednesday afternoon.

Mr. Drummond said many people who held responsible positions in the country had been scouts because scouting self discipline.  Juvenile delinquency was largely caused because there were not sufficient people to help to run and scouting for boys in the town.  Boys must go about in gangs, must throw things, must be adventurous, and the scout movement gave them opportunities to be so in the right way.

Mr. Drummond considered that scoutmasters had quite enough to do without having to be bothered with financial worries and that was the job of the parents committee.

Miss Holman, J.P., opening the sale, said that if only they could get everyone scout-minded it would be a great help in forming their future citizens and making the town a better place.

Mr. Colwill proposed a vote of thanks to the speaker and the opener, and also thanked the parents committee, saying they were the best that any troop had in the town.  Patrol leader Peter Woods seconded.

Stall holders were Mrs. Robinson and Mrs. Woods, with Mrs.Walker and members of the committee in charge of the refreshments.  Over £10 was realized by the effort. 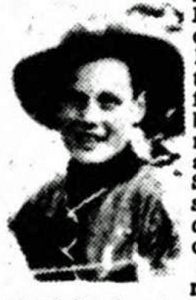 Believed to be the only boy scout in Morecambe holding the cord and backwoodsman badge is Patrol Leader Peter Woods, of the 5th Morecambe troop.  To qualify for this badge it is necessary to be a first class scout and hold six badges, including two cooks and two backwoodsman’s.  He received it after two trips to Great Towers, Windermere, one to Lancaster and a boating test and one to Quernmore.  He is the son of Mr. and Mrs. F. Woods, of 58 Sandylands Promenade, Morecambe.

Dick Barton, Paul Temple, Sherlock Holmes, and a host of other famous detectives had nothing on the members of the local boy scouts troop who held their district wide game on Monday night.  The 8th, 11th and 13th were the “Police and custom men”, whose job it was to prevent the “black marketeers”, well represented by the 4th, 5th, 16th and 7th from getting six boxes of contraband into the 8th’s headquarters.  The game lasted from 7.30 until 8.45 when it was declared a draw with three boxes smuggled into the HQ and three intercepted.