LOANS totalling £400 have made possible the erection of the new 5th Group Boy Scouts headquarters in Woodlands Drive.  They were used for the first time by the group last night but the official opening will not be until the New Year.

The premises, comprising two old army huts, were bought by the group for £135.  The cost of erecting the huts will be £500.

The group hope to raise the money to repay the loans within four years.  Each week they hold a whist drive, and have planned a jumble sale, and bring and buy sale, and a Christmas competition.

The cubs and scouts themselves have helped to raise money by collecting waste paper.

The first whist drive was held in the Atlantic Hotel on Monday last week and raised £6.  The first donation, a sum of £10, was made by Mr. Richard Blacklock, president of the Morecambe, Heysham and District Boy Scouts Association.  A loan of £200 was given by the local Scouts Association, and £100 was loaned by a private donor who wishes to remain anonymous.  Ten other people have each loaned £10.

The ground on which the hut has been erected has been loaned by Coun. Kershaw, and is to be paid for at a later date.  Most costly part of the erection was a 3 feet deep concrete base made necessary because the land is often under water.

Scout and cubs had helped workmen to lay the foundation.

The old group hut, which belongs to Miss Mary Gray, of Lordsome Farm, who is the District Cubmaster, was only 30 feet by 15 feet, and was too small for the 107 scouts, senior scouts, and cubs in group.

The new hut, 51 feet by 33 feet, is to be partitioned into two sections.  One half will be used as a recreation room, and the other for the scouts den, the seniors den, patrol corners and a chapel.

Interesting feature of the chapel will be an altar, which is being designed and built by Mr. Eric Pickles, a lay preacher of St. John’s church.  Mr. Pickles is religious instructor to the group.

The old hut is to be pulled down.  The outside walls will be used to repair a barn belonging to Miss Gray.  Partitions and fittings will be used for the new hut. 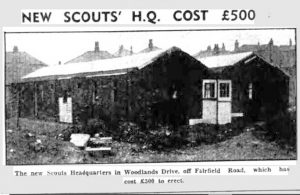