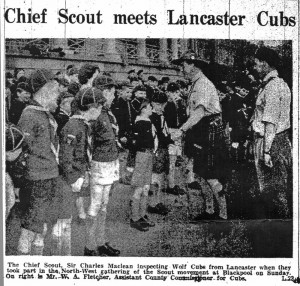 THOSE who attended the Camporee and conference at Blackpool last week-end which afforded them an opportunity to meet their leader, Chief Scout Sir Charles MacLean, found it well worth while.
On Sunday morning after service at which the address was given by the. Bishop of Lancaster (the Rt. Rev. A. L. E. Hoskyns-Abrahall), the Chief Scout, with delightful informality, visited the Scouts in camp at Stanley Park. Subsequently, he reviewed and addressed 1500 Wolf Cubs on the lower promenade facing the Imperial Hotel, where together with Lord Derby, the president, he later lunched and spoke to North-West Scouters in conference for the weekend. As with the Scouts, the Chief shook hands and exchanged a word with many of the Cubs as he passed between their ranks. They were obviously pleased and in turn gave him a royal welcome. Those at the conference were also afforded an opportunity of a word from the Chief at tea, after his address, and found it a stimulating experience.

ANNUAL MEETING
Plans are afoot for the annual general meeting of the Lancaster and District Boy Scout Association, which will take place in the Town Hall on Monday evening next, May 8, at 7.30 p.m., when we hope to welcome the Mayor (Coun. P. J. Oliver). By the way, this is an open meeting and we shall be glad of the company of any parents of the boys and interested members of the general public. A secretarial report of the many activities held during the year under review will be presented together with a statement of accounts by the treasurer, and apart from the election of the main body of officials, one item will be the election of a new president in succession to the late Dr. J. A. Tomb.
It is interesting to note that a meeting to discuss the formation of a Local Association was first held on Friday, May 27th, 1910, in the Lancaster Y.M.C.A.

CAMP SITE.
The Association is at present served at administrative level by an Executive Committee consisting of twelve lay and twelve Scouter members. Important sub-committees are Finance, Warrants, which approves suitable applicants wishing to become Scouters), and the Littledale Management Committee concerned with the development of the T.W. Helme Memorial Camp Site. Work has been proceeding on this site for many months chiefly by Scout working parties, and it is hoped it will soon be ready for use. According to the last published report, the L.A., had jurisdiction over approximately 25 separate Scout Groups with a total membership of 960.

FINANCE
The L.A. has a small subscription list, but this is inadequate and the Groups are self-supporting, relying in the main on their own efforts to raise funds to keep Scouting going, and helped in many cases by a loyal parent following known as Group Committees, The annual Bob-a-Job which occupied the attention of the Scouts over Easter is largely their effort to help the nerve centre of the movement at Imperial Headquarters, London, to maintain an even keel in the general administration of Scouting: approximately two shillings out of each three collected in payment of work done being retained locally by each Group according to the quota earned.
AKELA