THE first Lancaster boy to qualify for the Duke of Edinburgh’s Silver Award for Scouts, 17 years old Ronald Wild, of 42 Park Road, Lancaster, a senior scout with the 13th Lancaster Troop, received the award from the Mayor of Lancaster, Coun. P. J. Oliver, at the Mayor’s Parlour, on Monday. 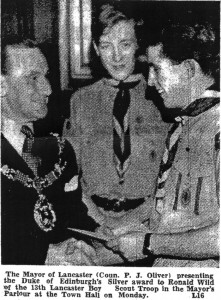 Other awards  have been gained by youth club members in the Lancaster District, but Ronald is the first Scout to qualify since members of the movement became eligible to compete for it, 12 months ago.

In gaining the award Ronald, a sub-prefect and member of the Middle Sixth Geography form at Lancaster Royal Grammar School, had to reach a high standard in physical fitness, public service and expeditionary work.

He began scouting as an eight year old when he joined the 23rd Lancaster (Christ Church) Wolf Cub Pack. The leader of the pack, Miss J. Beck, Ronald’s aunt, was among those who accompanied him on Monday.

*  Arthur Huck was born 1902 in Holme, Westmorland. His father William Huck was farming at Pickle Farm, Hutton Roof in the 1911 Census.