SIR, – May I call the attention of your readers to the fact that the North-West Lancashire Boy Scouts’ Association are holding a rally in Blackpool on June 21st this year, and that information has been received that the Chief Scout, Lord Baden-Powell, has intimated his intention to be present.

North-West Lancashire County Scout area covers North Lonsdale, South Lonsdale, the Fylde and Preston areas, and the progress of Scouting in the N. W. County is most marked.

The increases are as follows:-

This is an increase of 2,605 Scouts in five years, but it is a very small percentage of what the area should be capable of doing.

Let North-West Lancashire “Go one better” in 1930 and increase the numbers to over 5,000 before the Chief Scout pays us his promised visit.

At a private meeting of the North-West Lancashire Scouts’ Association Publicity Committee, it was reported that a definite promise of the use of the aerodrome at Squire’s Gate for the rally had been obtained. “The camping ground,” said a member of the committee, “is ideal, for we have an area with almost unbounded limits. Miles of sandhills, defending us from the Irish Sea, help to create the true atmosphere of the life of a rover.”

Amongst the thousands taking part will be members from Cumberland and Westmorland, West Riding of Yorkshire to Leeds, and thence to Manchester, the Isle of Man, and the whole of the county of Lancashire. To bring these large numbers to the town special trains and motor-coaches will be arranged, whilst many, particularly from neighbouring associations, will make the journey by road complete with trek cart and camping outfits.

On the Sunday morning an open-air service, conducted by Lord Baden-Powell, will be held, and the final event will be on the Sunday evening, when the whole gathering will surround the enormous camp fire. 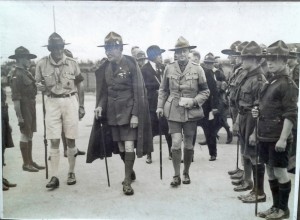 In a downpour of rain, a crowd of over 15,000 welcomed Lord Baden-Powell, the Chief Scout, at the Jamboree of the North-West Lancashire Scouts, held at Squires Gate, Blackpool on Saturday.