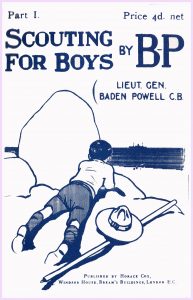 Lieut.-General Baden-Powell is now engaged in perfecting an organization of “Boy Scouts,” and is giving a series of lectures on the subject throughout the country. He is also publishing a handbook explaining the details of his scheme under the title “Scouting for Boys.”  This handbook will be issued in six fortnightly parts, price 4d., and the first part, which was on sale on Wednesday (15 January 1908), now lies before us.

In it Lieut.-General Baden-Powell explains the objects and reasons for the institution of the “Boy Scouts.” These are, briefly, to counteract the present tendency to degeneration, and to improve the material and moral standing of the nation’s manhood by inculcating a better spirit of patriotism and self improvement among the rising generation, by a means which would be attractive to the boys themselves, and should, if well applied, get hold of a very large proportion of them.  He suggests that this might easily be done if every young man in the country would take half a dozen boys in hand and teach them this so called scouting, which in point of fact is good citizenship taught by an attractive method.