The money mostly raised by the Cubs was officially handed over to the International Scouting Commission at the annual meeting of  Lonsdale District Scout Council last week. It was received by Mr H. J. Dahl, Assistant County Commissioner at the Community Centre, Bolton-le-Sands, specially decorated for the occasion with posters designed by the Cubs and with pictures sent from the Solomon Islands by Tess Pickford, ex-Guardian reporter.

Lonsdale District Commissioner Mr R. Sharrock reported to the meeting several other successes. Membership was again at a record level, with 817 Cub Scouts, 525 Scouts and 76 Venture Scouts, although the recruitment of leaders was a little more of a problem.

He added that the Littledale Activities Centre had been improved for the use of handicapped people by the addition of a concrete path paid for out of the Queen’s Jubilee Fund.

He also noted the success of the district in county competitions notably in the winning of the Helme swimming shield.

The Scout and Guide Band continued to be in constant demand, and the two campsites were well used in the past year. The one at Silverhelme will have a £1,000 worth of improvements made to it in the coming year.

He ended by expressing best wishes to Mr J. Davey, retiring treasurer and by thanking Mrs D. Brown who had worked hard for Scouting in her work of selecting potential leaders. 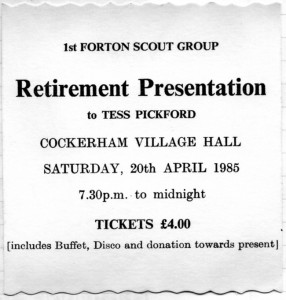 Tess Pickford, 83, a former reporter on the Garstang Courier and Longridge News, who died recently, was a larger-than-life character whose own life and work touched many people in rural north Lancashire.

She entered journalism in her mid-40s, having previously worked as a tea lady in a bus converted into a cafe at Shap, a bottle washer in a Lancaster dairy and in the office of a plant nursery near Lancaster that was famed for its giant onions.

Tess’s love of travel and travel writing brought her into contact with the late Bill Armitstead, editor of the Garstang Courier in the late Sixties.

He was so impressed with her writing that he offered her a job. She was a reporter on the Courier during the late Sixties and early Seventies, covering the rounds of parish councils and village fetes alongside her close friend, freelance reporter Pat Seed, who was to become one of Britain’s best known fundraisers for cancer care.

Although known as an adventurous character, Tess stunned colleagues in 1977 by jetting out to the Solomon Islands to do a two-year voluntary service stint teaching journalism in the Pacific archipelago.

Returning to her cottage home in Forton, she continued reporting as a freelance, working mainly for the Lancaster/Garstang Guardian and the Lancashire Evening Post.

She was one of the village’s best loved residents and as Scout leader for 30 years was affectionately known as “the First Lady of Forton”.

In May 1984 she was invited by Seed’s husband, water engineer Geoff, to join him on an evening visit of villagers to a water plant at Abbeystead.

She would have gone on the trip had it not been for a clash of dates. That night had been pencilled in for Tess to be presented with the Silver Acorn award for her scouting activities – a presentation she could not miss.

An explosion at the water plant that night caused the death of 16 people, including Mr Seed.

Tess immediately stepped in to help his grieving, cancer-suffering widow by taking calls from the national media about the disaster.

Pat Seed was by that time known throughout the country for her fundraising for Christie Hospital, Manchester.

Tess had been an active member of the North Lancashire branch of the NUJ, the Garstang Writers’ Group, the Pat Seed Appeal Fund and the Garstang Wine Circle – visitors to her home often had to dodge flying corks from her effervescent home-made wines!

Ten years ago Tess moved to a flat next to the Lancaster Canal at Bilsborrow, where she took particular pride in the view and gardens next to her flat. She was also instrumental in setting up the Pat Seed Memorial Garden in Garstang.

She coped bravely with failing health. Her poor eyesight in later years was a particular burden.

Leaders from north Lancashire’s scouting community formed a guard of honour at her funeral at Preston Crematorium.