Mr. Storey was a member of the Lancaster Town Council, being returned for St. Anne’s Ward in the November of 1892. He resigned his seat in 1900. A strong feeling existed in the autumn of 1910 in favour of asking him to accept the office of Mayor of Lancaster for 1910-11, but owing to a technical difficulty the matter dropped. Mr. Storey was appointed a Justice of the Peace for the County Palatine of Lancaster in 1898, and Deputy Lieutenant in 1904.

The most signal public honour conferred upon him was in 1904 when he was chosen by King Edward to fill the office of High Sheriff of the County Palatine of Lancashire, the most important function of the kind in the kingdom. During his year of office, Mr. Storey had the honour of receiving King Edward at the railway station, when his Majesty visited Liverpool to lay the foundation stone of the Cathedral. 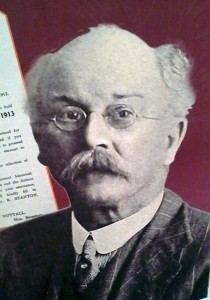 The measure of Mr. Storey’s popularity was never more fully displayed than when he filled this office. In accordance with an old-established custom peculiar to North Lancashire, he made his state entry into the county town at the first assizes there after his appointment, and the occasion was seized by the townspeople for a remarkable display. The old town blazed with bunting, triumphal arches were erected, and after entertaining 11,000 guests at Bailrigg, the High Sheriff was escorted into the town in the midst of a procession two miles long.

As a sportsman, Mr. Storey has shown great versatility. Whilst at “Owens” he stroked the College boat and was also Captain of the Rugby Football Fifteen, and was also selected to play for Lancashire, a high honour in the days prior to professionalism. He still shows his interest in the game, and also in cricket, swimming, rowing and other healthy sports, by subscribing to numerous local clubs, of many of which he is either President or past President.

He is also President of the local Rifle Club and “B.P.” Boy Scouts’ Association, and has taken a great interest in the Territorial movement, Messrs. Storey Bros. and Co.’s employees contributing a company to the force. Mr. Storey is equally well-known in the hunting field. For several years he was Treasurer and Secretary of the Vale of Lune Hunt, and has for the last 10 years followed the Cheshire, North Shropshire and Sir Watkin Wynn’s Hounds.

During the brief visit paid by King George V. to Lancaster on Saturday, the 24th August, 1912, Mr. Storey had the honour of being presented to his Majesty at the Town Hall, and was afterwards recalled and thanked by the King for his services in connection with the Territorials. On his way to the station the King stopped at the Storey Institute, where he was received by Mr. Storey. His Majesty showed great interest in the buildings, asking numerous questions as to the work which is carried on there.