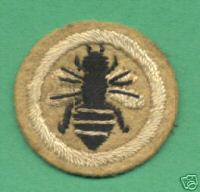 “At 16 years or over must have five War Savings Certificates, or be a member of the ‘Scouts’ Friendly Society.’ The principle was that money should be genuinely saved by the Scout out of his earnings or pocket money.”

Though thrift was a long cherished national objective, not least in time of war, this particular badge did not meet with universal approval. Some thought that it smacked of classism; Scouts from richer families would find it easy to win the badge whereas those from poorer families would find it impossible. B-P worked hard to dispel such thoughts. In a letter to Percy Everett dated October 17th, 1916, B-P wrote giving him ‘ammunition’ to use should anybody attack the badge at the forthcoming Manchester Conference.

“The first boy to qualify for it that I have heard of is one in my village troop here – quite a poor labouring boy with a drunken father and no mother – getting 7/6 a week. Aged 13½.”