Did you know that both Robert Baden-Powell, the founder of Scouting worldwide, and his wife had visited the local area?

Well, they did! – he came to Morecambe in fact, on several occasions, and here’s the proof . . .

Major General Baden-Powell, the hero of Mafeking, paid a surprise visit to the territorial camps at Bare yesterday. He was attired in civilian dress, and took the keenest interest in the work. He was obviously pleased with what he had seen and especially with the situation as a camping centre.

Yesterday (Tuesday) Major General Baden-Powell paid a surprise visit to the camp at Bare. He was only present about two hours, and walked about the camp in ordinary civilian’s dress. But he was seen and recognised by a number of visitors and much interest was taken in his movements, although the visit was purely unofficial.

Yesterday morning Major General Baden-Powell paid a flying visit to Morecambe. He arrived at Bare Lane Station shortly after 11 o’clock and was met by Capt. Fairburn Adjutant of the Middlesbrough Artillery, who are this week encamped at Bare, and he paid a visit to the camping ground. The visit was quite unexpected and unofficial the General being in civilian dress.

The visit of General Baden-Powell to Bare has been much talked of since last Wednesday, and general regret expressed that it was not more widely known. Such an event was a big thing for Bare, unofficial though the visit was, but we dread to think what the General would have thought if there had been many more photographic fiends following him about with cameras. But he was very wary, whenever a “snap shotter” got within range he adroitly turned round to look at the scenery opposite.

General Baden-Powell visited the camp of the 1st Northumbria Brigade RFA at Bare, last week. This was the largest brigade that has encamped here this season; and the visit of the gallant general aroused the greatest interest among the men. The day’s routine was gone through in the usual way, and the various drills, etc., were watched by General Baden-Powell with keen attention, particularly the practice with the new 15-pound B.L. concerted gun. Subsequently the general wrote a report upon his visit in which he expressed satisfaction with all he had seen, and commented upon the evident keenness of all the ranks. He added that ‘the success of the whole Territorial Force depends upon the efficiency attained by the Artillery’

(The area around Scalestones Point and the present site of Morecambe Golf Club, at Bare, was a regular training ground for the military at the end of the 19th /beginning of the 20th century. Large numbers of volunteer soldiers and, later, territorials camped on a regular basis during the summer months in fields in Bare (e.g. rear of the former Elms Hotel) and in Torrisholme.

In these photos of Bare, on the Red Rose Collections website you can see views of a camp at Bare.  One shows the band heading along Bare Lane passing the end of Hest Bank Road on their way to camp – are those Scouts and Boys Brigade members lining the pavement??

Previous to this, two areas further to the west had been used for artillery practice in the late 19th c – by the Battery Hotel (hence the name) and also, apparently on a site to the east of West End Road, in use as a fairground for many years. These latter sites having been vacated in favour of Bare, resulting from the growth of Morecambe as a seaside resort.)

Click here to see a map of Morecambe published in 1919. Note the “Bare Battery” at Scalestones Point.

(Scoutbase UK: “At the out-set the one thing Scouting could not be called was an Organisation, as it was far from organised. B-P. was still an active soldier, organising the Territorials in Northumberland, which kept him far from the hub of Scouting in London”)

The newspaper had previously also included this item in its August 28 1907 edition . . .

A 3 in, 7-pounder gun, dated 1873, which saw a great deal of service in Cape Colony in various operations against native tribes, while in the hands of the Bechuanaland Border Police, has been presented by the British South Africa Company to General Baden-Powell, who is an old Carthusian, and will, it is understood, be handed over by him to the (sic) Charterhouse, as a memento of the siege and relief of Mafeking.

(Note: this item appeared just one month after B-P had run his experimental camp at Brownsea Island, July 29 – August 9, 1907, to test out his theories regarding Scouting prior to the publication of Scouting for Boys in 1908.) 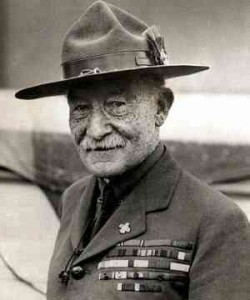 Arrangements are being made for a company of Colonel Baden-Powell’s boy scouts to camp at Sandside, Bolton-le-Sands. They will use the same tents as the young women from Manchester occupied during the Whitsuntide holidays.