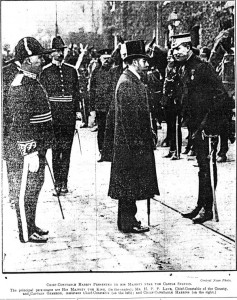 Mr Garnett reported that he had had a letter sent to each scoutmaster inviting him to bring his troop to Lancaster on the occasion of the visit of the King on Sat. Aug. 24th, also asking that the number of scouts likely to parade should be sent to the Sec. immediately. It was hoped that His Majesty might be pleased to inspect the troops.

Regulations as to the wearing of uniform on Aug. 24th were drawn up. It was decided that the scouts in each troop should be dressed as much alike as possible. The food & railway expenses were to be paid out of the association.

A special meeting of the Executive to consider the Visit of His Majesty the King was held in the Hostel on Tuesday August 13th, 1912. Mr. Briggs in the chair.

Arrangements for the King’s visit were made as follows. All Troops to parade at the Town Hall (George St. side) at 9.am under command of Rev. R G Stanley. Attention of Scoutmasters to be drawn to previous circular regarding uniform to be worn.

With regard to providing meals for visiting Troops, it was felt that it would be better if Scouts partook of breakfast before leaving home as there would be no time to breakfast at Lancaster.

No flags or colors to be carried but a patrol leader may carry his patrol flag on his staff.

Last Saturday afforded our scouts an opportunity of showing in a practical way their adherence to the second scout law: ” A scout is loyal to the king.” From both the town and sur­rounding districts scouts mustered strongly to help to line the streets along which his Majesty was to pass, their special position being in Market-street facing the square, in which the school children were massed. The four Lancaster troops mustered 99 strong, under Scoutmasters Wright, Price, Pflieger*, and Marks. The four Morecambe troops. under Scoutmasters Bright, Rev. R. E. Stanley, Rev. F. Kiernan, and Patrol leader Holt, numbered 48; the 1st Carnforth, under Scoutmaster Simpson, 13 ; 1st Halton, under Assistant-Scoutmaster Caton, 9 ; 1st Mell­ing, under Scoutmaster Sedgwick, 11 ; and 1st Hornby, under Scoutmaster Richardson, 13.     The total muster was 193, including ten scoutmasters and three assistant-scoutmasters The King’s arrival was greeted with a ” Royal salute,” the position being kept whilst he listened to the National Anthem. On his Majesty’s departure, “Hats on staves ” was given, and hearty cheering, which was continued until his Majesty had gone out of hearing.

The district commissioner (Mr. Garnett, Quernmore Park) has sent a circular of congratulation to scoutmasters, as follows:- “I should like to take the earliest opportunity I can to congratulate you on the appearance and steadiness of your troop of Boy Scouts on Saturday last, on the occasion of the King’s visit to Lancaster. The way in which you and your lads responded to the call to attend upon his Majesty the King was very gratifying, and speaks well for the discipline and esprit de corps of your troop. I hope the result of his Majesty’s visit will be to intensify the public interest in the movement, and to stimulate the healthy rivalry among our troops which is the foundation of the scout law, and which allows no factional jealousies among them to interfere with the one true aim and object of all scoutmasters, viz., the ultimate good of the lads under their charge.”

Outlying troops took the opportunity of frater­nising with each other, and some availed them­selves of the Y.M.C.A. troop’s offer, and used their rooms. That the utmost good feeling was evinced is well shown by some notes forwarded by the Carnforth scoutmaster, as follows:-“The alacrity with which the Carnforth scouts fell in on the Market-ground, prior to proceeding to Lancaster to receive their position, awaiting the arrival of his most gracious Majesty King George; the zeal and smartness they displayed during their march from Castle station to join the other troops, showed that feeling of loyalty one likes to see in our boys.   A photograph of the troop was obtained as a souvenir of a very happy day spent.  The Carnforth patrol beg to thank Mr. Sedgwick, of Melling, for the genial manner in which he received them, and feel that they would like to come into closer touch with such a friendly scoutmaster and troop. A dispatch-carrying game was also arranged with Halton; let the best troop win.”

* Frederic George Pflieger born 1875 in Switzerland married Hannah E. Mensforth in 1909. In 1911 they are living with Hannah’s parents at 73 Albert Road, Morecambe. He is an Assistant Hairdresser.

Camp service was conducted in the barn, as it was too wet to hold it out of doors. Sixteen of the troop and their scoutmaster paraded to the Wesley Church in the evening, two stopping to guard the camp.

Two cooks and one orderly were appointed each day, so that every boy got his share of cooking. Most of the time was spent in exploring the district, boating, &,c., although the weather was so bad. Not a single case of ” lack of discipline ” or ” breaking rules” was brought before the scoutmaster.

The Hornby troop camped at Kirkham in close proximity to the Territorials. They rendered ex­cellent service in the Y.M.C.A. tent, and as scouts do not accept payment for “good turns,” medals were presented to the boys by the association authorities as some acknowledgment of their usefulness.

THE KING IN LANCASTER

ENTHUSIASTIC SCENES IN THE STREETS

The most attractive sight to many people was that presented in Market-square, where were massed some 5,000 children from the elementary schools of the Borough, who had been rehearsed during the morning by Mr. J. W. Aldous, M.A., in the singing of a couple of verses of the National Anthem. The singing was led by the Borough Band and by some of the members of Mr. Aldous’s choir, who kindly gave their services for the occasion. There was a dense crowd in the square, and its surroundings, the crush being at some times so great that half-a-dozen women and girls fainted, and were attended to by members of the Nursing Division of the St. John Ambulance Brigade, who were in attendance at various points along the route in case their services were required. The square was guarded by Territorials and Boy Scouts, looking very smart and soldier-like in their uniforms, and by the Ripley Hospital Company of Cadets in khaki uniforms, who aroused the admiration of everybody by their smart bearing and the way they handled their rifles. His Majesty left the Town Hall at 10-50, and, proceeded along Brock-street, Penny-street, and Market-street, to the square, passing along a practically continuous archway of flowers and evergreens, to the accompaniment of the almost deafening huzzas of the vast concourse of people. On arrival in the square, the Boy Scouts saluted in their own peculiar method, the Cadets presented arms, and the children gave three hearty cheers, which the King acknowledged by raising his hat. The Royal carriage drew up quite close to the children in the centre of the square, and at a signal from Mr. Aldous, who occupied a lofty stand in front of the Central Cafe, two verses of the National Anthem were very creditably sung. At the close there was more cheering, the King bowing his acknowledgments as the carriage drove away.

About 5,000 children from the different schools assembled in Market-square at nine o’clock, and were marshaled into their allotted positions by the masters and mistresses. They entered the square by way of Chancery and Anchor-lane from Church-street, causing no inconvenience to sightseers in Market-street. The cadets from Ripley School, under Mr. C. Grime, wearing smart khaki uniforms and carrying rifles, contingents of boy scouts under Rev. R. G. Stanley of Morecambe and a company of members of the Church Lads Brigade under Mr. E. T. Tennant lined the street opposite the square, and were quite a popular feature of the spectacle. Some time before his Majesty’s arrival the crowd were entertained by the rehearsal of the National Anthem, which Mr. J. W. Aldous conducted from a highly elevated rostrum opposite the centre of the square, the Lancaster Borough Band, under Mr. R. Redhead, accompanying. Every available point of vantage was crowded with eager sightseers and in many cases great risks were run to obtain a view. As the Royal carriage turned Horse Shoe-corner the acclamations of the great throng in the streets were taken up by the waiting children, who cheered vigorously until the carriage came to a stand-still opposite the gaily decorated electric light standard in the centre of the square. Then the children sang two verses of the National Anthem copies of which, printed in purple, with a portrait of his Majesty were presented to the children as mementoes of a historic occasion. The singing was followed by three rousing cheers, which his Majesty graciously acknowledged, and then drove slowly away to the accompaniment of further enthusiastic cheering. The boy scouts with hats on poles, and the Ripley cadets and Church Lads Brigade at the salute, made an especially interesting picture.

From the Minute book of the South Lonsdale Boy Scouts Association Executive Committee, Aug 30th 1912.
Mr. Garnett in the chair.

The minutes of the last meeting were read and confirmed. It was reported that 180 scouts & 13 officers had paraded on the occasion of the King’s visit to Lancaster, Aug. 24th. Mr Garnett read the following letter from the Chief Constable.

“Dear Sir,
I should like to take this the first opportunity of conveying through yourself my appreciation of the services rendered by the fine muster of scouts who turned out to help us in connection with His Majesty’s visit, today.

I sincerely hope that the occasion will have provided an object lesson to all likely lads, of the good work & usefulness of the Boy Scout Movement, & that a large increase of the number enrolled may result.

The lads were very steady & did excellent service.