One of the oldest and best known residents of Grange, where she had spent practically the whole of her life, Mrs. Blanche Eden Smith has died at the age of 81 years.

Before her marriage Mrs. Eden Smith was a Miss Michaelson. She belonged to an illustrious Barrow family of that name who at one time owned Barrow Island, and after whom Michaelson Road is called. Portraits of the family are in Barrow Library.

In her younger days Mrs. Eden Smith was a keen mountaineer and sportswoman. She joined the Fell and Rock Climbing Club in 1919, was vice-president from 1935 to 1937, and made many initial climbs, particularly on Pillar Rock. Mrs. Eden Smith was also a founder member of the Pinnacle Club. In addition she was a keen hockey player, having played for some years for the old Grange Hockey Club; an excellent horsewoman, and a member of the Lancashire County Cricket Club. A keen swimmer, she was president of the Grange Amateur Swimming Club. She was also president of the Grange British Legion women’s section. During the last war she was an A.R.P. worker and in the 1914-18 war she was in the Land Army. She was also a keen worker for the Royal National Lifeboat Institution’s flag day.

Mrs. Eden Smith’s father-in-law, was Canon Smith, a former vicar of St. Paul’s Church, Grange. Her eldest son died less than a year ago and her younger son was killed on active service while in the navy.

The funeral service was held on Monday at St. Paul’s Church, Grange, and was conducted by the Rev. S. M. Davies (vicar), assisted by the Rev. C. Fowler, Flookburgh. Among those present were representatives of the Fell and Rock Climbing Club and the Grange women’s section of the British Legion.

The service was followed by cremation at Barrow. 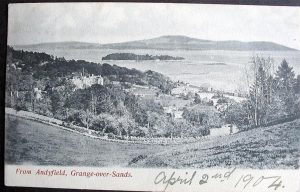