In the Census of 1911 the family is living at 89 Lower Knotts, Bradshaw, Bolton. Father John is a Bakery Engineer.

In 1939 Max was living at “Silverdale” Orient Drive (Woolton), Liverpool – there’s a coincidence! – with his mother and his brother John. His occupation is listed as Asst. Master Secondary School.

He was a Senior Master at Morecambe Grammar School for many years. 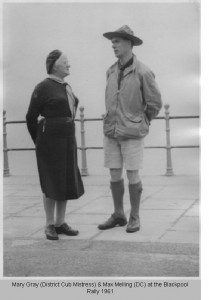 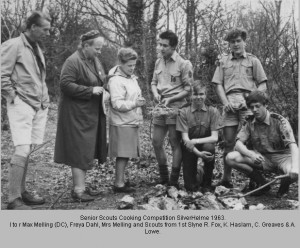 MAX MELLING 1914-2006 – Obituary
Friends and fellow scouters will have been saddened to learn of Max’s recent death at the grand age of 91.

Max had a long and distinguished career in Scouting.He was appointed as the first District Commissioner for Morecambe and Heysham and District in 1956 and he served in that capacity until 1971 having previously served as Secretary in Morecambe from 1948 until 1956.The SilverHelme campsite was purchased during his time at the helm.

A number of us will remember with affection his considerable contribution as DC. As scouts, he was the person charged with setting and assessing our hikes for the First Class and other badges. Those who knew him will recall that Max had a commanding presence, no doubt enhanced in our case by his position as Senior Master at Morecambe Grammar School as it then was. I remember two such hikes in particular when the late Bill Green and myself were firstly set the task of journeying from Carnforth to Silverdale. As a task en route Max asked that we find and describe the Three Brothers on Warton Crag – we never did get there. It was only in recent years that I revisited the Crag to finally pinpoint their position. Max was in the forefront of my mind as I stood there on a clear frosty January morning.

Max had a standing slot on the agenda for the DC’s report and I am sure I was not alone in waiting with eager anticipation for him to address the meeting. He had a unique presence, an aura, charisma as we are fond of calling it today to always say the right thing at the right time, so much so that the meeting hung on his every word. Perhaps this assurance stemmed from his firm beliefs and convictions, whatever, he could have you at one moment laughing and another in tears.

Our thoughts and condolences go out to his family at this particularly sad time, his death following so closely on that of his wife. 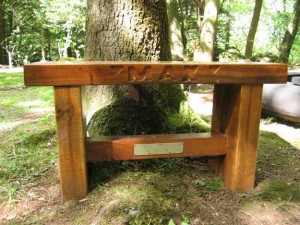 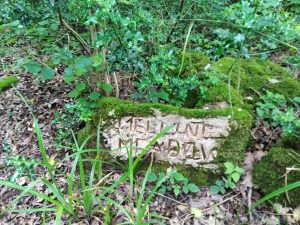