JDD was born on 7 Nov 1902 at 5 Buccleuch Street, Hawick, Roxburghshire.

His father George Ovens Drummond was a Grain Merchant, his mother being Alexandra Dodds.

In 1939 he is living on Fairfield Road, Lancaster with his wife Joyce Mary née Boorman. He is listed as Headmaster Private Secondary School.

The work of Mr. J. Dodds Drummond in connection with life saving in Lancaster has been recognised by the Royal Life Saving Association.

The Executive Council of the Association have awarded him a certificate of thanks in appreciation of his furthering the cause of life saving in the City and district.

Mr. Drummond, who is headmaster of the Friends’ School, is the honorary representative for Lancaster on the Royal Life Saving Association Council. During his seven years in this capacity, Mr. Drummond has seen the life saving movement in Lancaster grow from quite a small affair to something which plays quite a large part in swimming circles.

Up to two years ago the Lancaster Swimming Club did not take a keen interest in life saving. Since, however, this important work has grown to such proportions that they now have many instructors, and numerous pupils have gained proficiency certificates.

Another section of the community taking a keen interest in life saving is the City Police, who now have their own instructor, and have gained many high awards.

Mr. F. G. T. Adams, of the LMS Railway Co., has shown his interest in life saving by presenting a silver cup to the local Boy Scouts for annual competition.

Good work is done each year at the Royal Grammar School, and at Mr. Drummond’s school there are already twenty members of the life saving club.

Two well-known instructors who have done much to further lifesaving in the City are Mr. R. Todd and Miss Shipley, who have put in a tremendous amount of work. 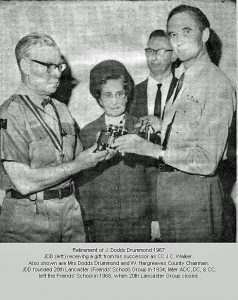 He donated a number of Scouting pictures to the Scout county presently displayed in Helme Lodge at Waddecar Scout Activity Centre.

Left the Friends’ School in 1968, when the Group closed.