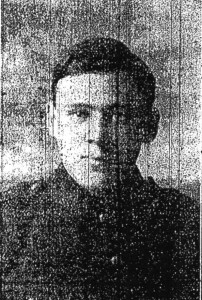 Tom Bolton was born in Caton in 1897, a son of Thomas Bolton, a tailor by profession & Elizabeth Robinson. In the 1891 census their address is The Brow, Brookhouse.

Letters received on Monday recorded the death of Tom Bolton at the front, killed instantaneously, by a high explosive shell which also accounted for four or five others.

He was the youngest son of Mr. and Mrs. Bolton, of Brookhouse, and the youngest of our local recruits, being born on the 16th November 1897, enlisted just before he was seventeen, arrived in France on Valentine’s Day, and died on the battlefield on April 28th.

He was keenly interested in cricket, football, and wrestling and his bright, cheerful, and exuberant spirit will ever be recalled by those who now deplore his loss. The school flag was raised half mast by his former school fellows.

Letters received on Monday conveyed the sad tidings that Pte. Tom Bolton, of Caton, had met a soldier’s death on the 28th. His death was instantaneous caused by a high explosive shell which also took toll of four or five others. Tom Bolton was the youngest of the Caton recruits . The youngest son of Mr. and Mrs, T. Bolton, of Brookhouse, he was born on the 16th November 1897, enlisted before he was seventeen, was in France on St. Valentine’s Day this year, and perished on the battlefield five months after his enlistment.His bright, cheerful, exuberant spirit will ever be remembered  who now deplore his loss. His former school fellows hoisted the school flag half-mast.

In a letter, Pte. Harry Shuttleworth (brother-in-law) of Bolton, says:- “I am sorry to write this bad news, but thought it would be best to let you know. Poor Tom (Bolton) was killed yesterday, the 28th, by a shell, also a few other poor chaps. I have his jack-knife, and there were some photos in his pay book, but don’t know if I can get them. If I can I will let your people have them. He died as an English soldier. I did not see him, the stretcher-bearer gave me the news today.”

In a letter from T. Fairclough, to his parents at Caton, there is a refernce to T. Bolton’s death. The writer says:- ” Our battalion has got a dreadful handling. We made a charge on the 23rd April, and we suffered to a great extent. You will most likely have heard of Billy Woolcock and Ted Mason being wounded, and up to the present Jim Akrigg and Walter Painter are missing (J. Akrigg is now known to be in hospital at Sunderland, and W. Painter in France).We were advancing since that day, and you will be most sorry to hear of young Tom Bolton’s death. I was within 20 yards of where he was killed, and saw him fall. He was killed by a high explosive shell, and his death must have been instantaneous. These few lines you must make the best of, for when I come home I shall tell you nothing of this great battle, for tongue can’t tell, and people won’t believe, so believe this,  that if I get home safe, I want to forget this wicked and bloody war. The words I have written may sound vulgar, but it is the only word for it. I think the Kaiser’s attempt for Calais now is an utter failure, and now we have him by the throat. I have Pte. J. E. Goodwin here in the same hut as myself, and he is A1. The weather here is glorious, as hot as mid-summer. I might tell you we have been in action with the Indian Ghurkas, and they are terrors.” 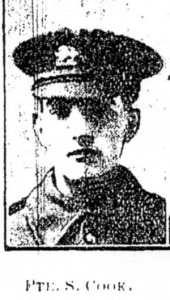 Stephen Cook was born on 1896, a son of John Cook and Jane Ann Slinger. They were married in 1883 at St. Paul’s Church, Brookhouse. In the 1911 census the family were living at Townend, Caton.

Lancaster Observer 21 May 1915
Pte, S. Cook, B company, 5th King’s Own, formerly postman at Caton, writing to his father says:- “On the 8th of this month I was blown up in the air two or three yards and then buried. I felt as every bone in my body had been knocked loose. I think I went mad for about half-an-hour. I did not know where I was going or what I was doing. You know the wash-house yard of the last house we were in? Well, you could nearly put it in the hole made by the shell.”

In letters announcing the death of Sgt. Threlfall and others on Wednesday week, Capt. Deed mentioned that the shell which caused their deaths wounded also Pte. S. Cook. Pte. Cook, who belongs to Caton, had already been in hospital after being “blown up” and buried by the explosion of a shell on the 8th May, as mentioned in the Observer of May 21st. Before enlisting, Cook was postman at Caton.

Mr. John Cook, fireman at Messrs. Storey Brothers’ Mill, Glenroyd, Caton, received news on Friday that his son Pte. Steven (sic) Cook, formerly postman at Caton, had died from shell wounds. Deceased served in B Company of the 5th King’s Own, and had been twice wounded.

He received his mortal injury from a shell which killed Sergt. R. Threlfall, Sergt. A. Dawes, Corpl. Sandham, Lance Corpl. E. Harlowe, and Lance Corpl. McGowan, on May 26, in a dug out. Capt. Deed described the incident at the time. Pte. Cook died on May 29th. He was just 19 years of age, and joined the 5th King’s Own last August having been a postman about two years. He was a member of the Caton Church Choir, and Victoria Institute. His great-uncle Pte. A. Cook, served in the Bengal Lancers during the Indian Mutiny. Much sympathy is felt for Mr. Cook, who lost his wife 18 months ago.

A memorial service was held in the Church at Brookhouse on Sunday afternoon, there being a crowded congregation. The Vicar (Rev. T. Mercer) conducted the service impressively, and paid a fine tribute to the heroism of deceased. The organist (Mr. Shaw) played Chopin’s Funeral March, and the choir sang the anthem “Blessed are the departed.” The “Dead March” in “Saul” was also played.

Raymond, the 11th and last child and 10th son of James Dowthwaite, a cotton spinner and later a nightwatchman, and Margaret Wilson, was born in Caton in 1898.

Much sympathy is extended to Mr. and Mrs. DOWTHWAITE, of Dam Bank, Caton, at the loss of their son RAYMOND, after all fighting was finished. Raymond was attacked by “flu”, to which pneumonia supervened, and proved fatal, on the 25th November. This is the second son lying buried in France. Three other sons are still in the army in Egypt, Ireland, and England. Raymond was in his 21st year.

Note bottom right Nurse C Addison, one of only four women commemorated on the war memorials in our area. (LMHG)

Richard Stanley Hutton was born in Kendal in 1893. He was a son of Richard Robinson Hutton, a Clerk of building works, and Agnes Mary Scales; they were married in Kendal in 1885. In the 1901 census the family were living at 8 Dumbarton Road in Lancaster and in 1911 at 45 Regent Road, Morecambe.

Richard is buried in Lancaster Cemetery Grave B CE 945.

News has been received of the death of Pte. Stanley Hutton, of Regent-road, Morecambe, as a result of a bathing accident in Ireland. Pte. Hutton had been a member of the St. John Ambulance Morecambe Division, for several years, and left for service on the war breaking out. He was sent to hospital at Athlone. Writing from the Military Hospital, Athlone, to Mr. and Mrs. Hutton and family, Regent-road, Bombr. E. Lymm, who injured his hand in a gallant attempt to effect a rescue, says:- “It is my sad duty to write you respecting poor Stanley. We were both out bathing together yesterday (June 16th), when he met with the mishap. It was off Carrberry Island, Loch Rae (Lough Rea?), where we were bathing. About 75 yards away were the rocks, towards which we commenced to swim. I considered the distance too much for Stanley, and I suggested I should swim back for a boat. When half way on the return journey I heard a splash, and I at once noticed him coming to meet me. Shortly afterwards I saw him throw up his arms, and I knew he was in difficulties. At once I dived from the boat and caught him under the arm, trying hard to get him towards the shore. He was, however, very quiet, and appeared to be unconscious. I kept him up for two or three minutes, and shouted for help, but I could not hold out long enough, as I was swallowing water very much. A second time I dived, and I just felt my foot touch him, but was unable to bring him to the surface. After a while I got assistance, and Stanley was eventually brought to the shore, where artificial respiration was unsuccessfully tried. I can only say how sorry I am for you all, and I hope God will bless and comfort you in this hour of great trial. I trust you will accept my keenest sympathy.”

James was born in Lancaster in 1888 the son of Christopher Prescott and Jane Ashton. In 1911 he was employed as a Commercial Clerk at a Linoleum Works living at 50 Rydal Road, Lancaster.

Mr. and Mrs. Chris. Prescott, 50 Rydal-road, Lancaster, have been officially notified of the death from wounds received in action of their younger son, L-corpl. James Francis Christpher Prescott, No. 241,092, 1/5th Duke of Corrnwall’s Light Infantry. He was wounded on Saturday, June 3rd, and died a few hours later. Writing under date June 5th, Lieut. C. E. Vowles said:- “It is with the deepest regret and sympathy I write to tell you of your son’s death yesterday morning. He was wounded while at work with his platoon on Saturday night, his first actual experience of trench work. He was taken away at once to the first-aid post, and the doctor there gave hope of his recovery, but a subsequent examination revealed further mischief, and he passed away in hospital while unconscious. One shell did the mischief, and also wounded several more of my men. I feel bound to say he was one of the best N.C.O.’s in the company, and was universally loved and respected. His loss to the platoon is very great, and he will not easily be replaced.”

L-corpl. Prescott, who was 19 years of age, was born on the tenth anniversary of his parents’ wedding, and attended St. Peter’s school, after which he entered the general offices of Messrs. James Williamson and Son. He became an active member of Williamson’s Cricket Club, and was a popular player. When the boy scout troop was formed in connection with St. Peter’s, he joined, and subsequently became assistant scoutmaster. In January 1915, he entered upon hospital work in the south of England, rendering much service for just over 11 months. Then he joined the Duke of Cornwall’s Light Infantry, and after a short period of training, he was drafted to France, where he was engaged in the drilling and instruction of troops for some time before going into the trenches. His elder brother, Rev. Joseph Leo Prescott, is a chaplain with the troops in France, and they have met on two or three occasions whilst on the Continent.

John was born in 1899 in Ambleside. In the 1901 census the family were living at Edinboro, Ambleside. The father, William, was born in 1872 in Chilton Folliatt, Near Hungerford, Wiltshire. The mother Susan Rebecca Rudderham was born 1867 at Northwold, near Thetford, Norfolk. The parents were married in the Kendal area in 1896.

Pte. W. Vockins, 19, K.O. is reported to have died of wounds at a base hospital in France. He enlisted when 17 years of age, being formerly a porter at Melling Station.