CHOSEN on merit from among 16,000 scouts in the North West, three local senior scouts will leave Morecambe on Monday to attend the Scouts’ and Jubilee Jamboree at Sutton Park, near Birmingham.

The town recognised the honour when the three scouts were invited to the Mayor’s Parlour on Tuesday and received from the Mayor, Coun. Mrs. S. L. Birkett a plaque bearing the town’s coat of arms, which will be hung outside their tent during the jamboree.

Mr. J Butler, Assistant Scout-master of the 5th Morecambe and Heysham Scouts, represented the District Commissioner and presented the three scouts to the Mayor and civic officials.

Hall and Illingworth are members of the 5th Morecambe and Heysham troop and Lawson comes from the 13th (St. Mary’s) troop.

The jamboree celebrates the golden jubilee of the scout movement and the centenary of the birth of Lord Baden Powell, the founder. 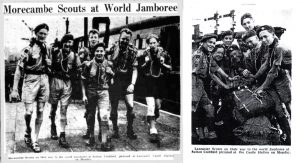 Three special trains are to take Boy Scouts, Cubs, their parents and friends from the Lancaster, Morecambe and district to the World Scout Jamboree at Sutton Park, Sutton Coldfield.

Three scouts who will officially represent the Morecambe, Heysham and District Boy Scouts Association are Norman Hall, of 81, Regent Road, Morecambe, and David Illingworth, of 53 Fairfield Road, Morecambe, who are both members of the 5th Group; and Michael Lawson, of the 13th (St. Mary’s) Group.