THE North-West Lancashire contingent of Rover Scouts, consisting of members from Preston, Lancaster, and Blackpool, are having a great time at the World Rover Moot, writes Scoutmaster W. Fazackerley, 13th Preston.

Leaving England on Friday week, on the s.s. Nevasa, from Immingham, they soon settled down to the three days sail across the North Sea to the Baltic via the Kiel Canal. The sea was calm at first but rather rough in the Baltic. There was much fun in using the hammocks.

The island of Ingaro was reached on Tuesday morning, and the Rovers were taken ashore in the ship’s boats. One thousand Rovers were on board, including Lord Hampton and Col. Walton, and representatives from most British colonies.

Camp was soon pitched and the whole contingent attended the official opening by Lord Baden Powell in the sports ground. The Chief’s speech, and the speech of Prince Gustav, was relayed on the Swedish radio.

Wednesday was spent in fraternising with the many foreign scouts and attending the camp fires in the evening, where as many as a dozen nationalities provided the programme.

A party visited  Stockholm on Thursday, and had a great time viewing the magnificent harbour etc. Most of the people can speak English- of a kind, and when they cannot they are only too eager to try. So we get on very well.

British teams met foreign teams at rugger, soccer and polo on Friday and Saturday, and there were two international camp fires on Saturday and Sunday, when the public were admitted to the camp.

The British Scouts leave camp to-day (Monday) and stay in Stockholm Harbour for two days. They are having conducted excursions into town and country. To-night they also attend an international rally in the Stockholm Stadium. The Lancashire boys are in Crew G, along with contingents from Worcestershire, Buckinghamshire, and Yorkshire, with Mr. T. W. Helme, J.P., of Lancaster, as crew leader. 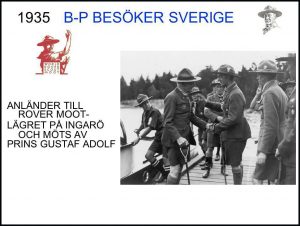