Tom Helme was a part of the Local Association from 1911 and was the first DC to wear uniform. He was County Commissioner from 1938-1948. His bequest enabled Littledale and SilverHelme campsites to be bought.  The County swimming gala trophy is also named after him and Helme Lodge at Waddecar Activity Centre. He died on 4 Nov 1949 at 14 Elms Road, Bare – a great benefactor to Scouting. 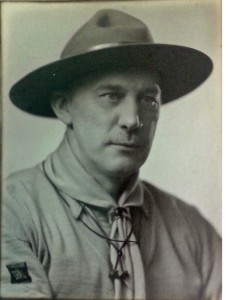 In the 1881 census Norval and family were living at 11 West Road, Lancaster.

In the 1891 census the family were residing at Lindeth Lodge, Silverdale where Tom and his siblings had a governess Alice Orchard from Launceston in Cornwall. Looking at the 1891 OS map this property, on Lindeth Road, is adjacent to the Wolf House Gallery.

In the 1901 census the family had moved to Springfield Hall (this building, which had 25 rooms,) is now demolished and was in the Infirmary grounds – link to map).  Tom was then an undergraduate at Trinity College Cambridge; he subsequently received a Master of Arts degree:

Also living with them was Tom’s cousin William George (born 14 Aug 1881 in Morecambe), then a medical student, who features in Lonsdale’s archives himself. William was the son of William George, a Wesleyan Minister born in Liskeard, Cornwall in 1851, and Margaret Elizabeth Helme (marr. 11 August 1880). In the 1911 census William Jnr. is living at 2 Fenton Street, Lancaster.

An interesting fact is that according to records Tom left Liverpool on 28 Sept 1909 on board the SS Lusitania to travel to Montreal in Canada. (Source: Ancestry.com, List or Manifest of Alien Passengers for the United States.) The Lusitania, of course, was a British ocean liner, holder of the Blue Riband, and briefly the world’s largest passenger ship. She was launched by the Cunard Line in 1906, at a time of fierce competition for the North Atlantic trade. On 7 May 1915, she was torpedoed and sunk by a German U-boat, causing the deaths of 1,198 passengers and crew.

What we Reported 25 Years Ago

The photo below shows Tom (front row, middle) outside Springfield Hall with members of the the 13th Lancaster Rover Crew.

I am told that Scouting circles in North-West Lancashire, and particularly in Lancaster, have received with pleasure the intimation that County Commissioner T. W. Helme, who is also a county alderman, has received the Boy Scout St. George’s Day award of the Silver Wolf for his most excellent services to the movement.

Mr. Helme, whose father, the late Sir Norval W. Helme, was Liberal M.P. for Lancaster, is a practical Scouter and a most enthusiastic leader.

He has held many offices in the Lancaster Association of Boy Scouts which he joined as an executive member in 1911, and in 1928, he was appointed District Commissioner for the North-West Lancashire area, succeeding the Late Alderman William Briggs.

When Sir Matthew Fell resigned as County Commissioner in October, 1938, Mr. Helme took over the work.

The Silver Wolf honour, which is generally awarded  for services of national or international importance, is richly deserved because he has travelled extensively in the interest of the movement, having led moot and jamboree contingents to Hungary, Sweden, and Holland.

Norval Helme’s father was James Helme 1823-1882, born Spark Bridge near Ulverston. James was baptised at the Wesleyan Church in Ulverston on 1 March 1823 the son of Robert Helme a ‘Refiner’ from Backbarrow and Margaret his wife. Robert Helme hailed from Westmorland. He married Margaret Watson at Heversham Church on 11 June 1810.

James appears to have become a prosperous Master Linen Draper and was living at 2 Great John Street in Lancaster in 1861 to 1881;  in 1871 the family had 7 sons and 2 daughters. James married Mary Jane Milner of Skerton at the Wesleyan Chapel in Lancaster on 15 Nov 1848.

James Helme ran a drapery business in Church Street for many years – here are some examples of his advertisements in the local newspaper.

In the 1869 Kelly’s Post Office Directory his entry reads as follows:-

HELME James Personal Estate £6,995 0s. 1d.
20 April. The Will of James Helme late of Lancaster in the County of Lancaster Draper who died 28 November 1882 at Lancaster was proved at the Principal Registry by Norval Watson Helme of West Place Lancaster Table Baize and Varnish Manufacturer and James Milner Helme of the Firs Rusholme near Manchester in the said County M.D. the Sons two of the Executors.

“In 1869 Mr. Helme, sen., formed the company of Messrs. James Helme and Co., to manufacture leather cloth and Table baize at Halton Mills. This business has been successfully and considerably developed.”

The 1881 Mannex Directory records ‘an extensive manufactory of table baize and leather cloth of James Helme and Co.’ at Forge Bank Mill at Halton. After the purchase of Helme’s by Williamsons in 1932 the works was closed.  (James Price, Forge Bank Mill, Halton)

As your Secretary it is my duty to record the work of this Association for the past twelve months.

It is with deep regret that I have to record the death of our President, the late Alderman T. W. Helme. Any words I could use would be totally inadequate in expressing the worth of the late Mr. Helme to this Association, and the esteem in which he was held in the Scouting movement here and further afield. We mourn the loss of a great gentleman and a loyal friend, but we confidently believe that his example will be an inspiration to this Association for the accomplishment of all the work that lies ahead.

£221,337 Paid In Death Duties
PROBATE of the will of the late Mr. Thomas Wilson Helme, of “Springfield,” 14, Elms Road, Bare, Morecambe and Heysham and formerly of Springfield Hall, Lancaster, a Justice of the Peace for the County of Lancaster and an Alderman of the Lancashire County Council, has been granted to his brother, Mr. James Helme, and his nephew, Mr. Alexander Helme, power being reserved to make a like grant to his nephew, Squadron-Leader James Michael Helme, A.F.C.

After certain specific and pecuniary legacies to members of his family and personal friends Mr. Helme left a legacy of £10,000 to the Boy Scouts Association incorporated to be used as to both the capital and income therefrom for the benefit of scouting in the Scout County of N.-West Lancashire and limited, unless there is some specially strong reason to the contrary, to the Scout District of South Lonsdale.

Mr. Helme expressed the desire that the District Commissioner for the Lancaster Association and his brother Mr. James Helme should be consulted as to the application of the said sum, and he expressed the hope that it might be so applied as to be of permanent and lasting use for the benefit of Scouting in the area as, for instance, by the purchase of a suitable farm and land, or for the provision of a fund for the endowment of some special purpose.  Mr. Helme declared that he left this bequest in thankfulness for the benefit and happiness Scouting had been to him personally and because he considered it the best Youth Movement for the future of our country.

Mr. Helme also bequeathed a legacy of £500 to the Rowley Lodge of Freemasons No. 1051 and a legacy of £1000 to the Masonic Hall Committee, Lancaster to be applied in connection with the building of a Masonic Hall or the extension of the existing building, or the furnishing thereof; and to the Lancaster Branch of the District Nursing Society and the Lancaster Branch of the Invalid Children’s Aid Association £500 each in memory of his mother, the late Lady Helme.

We are informed by the solicitors to the estate that owing to the recent severe increase in Death Duties it is unfortunately probable that the residuary estate will not be sufficient to pay the legacies in full, and indeed, in the case of the charitable bequests, possibly not at all.

Lancaster Guardian 26 June 1942:-
LADY HELME
Death of 93-years-Old Citizen
WE regret to announce the death, which occurred at the Westhaven Nursing Home, Lancaster, on Saturday, of Lady Helme, widow of Sir Norval W. Helme, who died in 1932.  She leaves two sons – County Alderman T. W. Helme, J.P., now of Bare, and formerly of Springfield Hall, Lancaster, where he and Lady Helme resided until a short time ago; Mr. James Helme, a former member of the Lancaster City Council, and now a Vice-Chairman of the Lunesdale R.D.C., and a daughter, Mrs. Gregory of Barnet.

Her Ladyship was formerly Miss Mary Wilson, elder daughter of the late Mr. Thomas Wilson (Retired Tea Merchant), of Upton House, Caldbeck, Cumberland.  She was married to Sir Norval on July 17, 1877, and they celebrated their golden wedding in 1927.  Sir Norval, who received his knighthood in June, 1912, was in his 83rd year when he died in 1932.  Lady Helme was in her 94th year.  Her husband entered the old Town Council in 1889, and he retired in 1919, and three years later was honoured by the conferment upon him of the Honorary Freedom of the Borough.

Lady Helme was Mayoress of the Borough of Lancaster in 1896-97 the Diamond Jubilee year of the late Queen Victoria, and she gave valuable help to her late husband in his numerous public, religious, and philanthropic activities.

When Sir Norval Helme was President of the Royal Lancaster Infirmary in 1920, he and Lady Helme made a gift of £1,600 towards equipping the Springville home for nurses adjoining the Royal Infirmary.

In 1928, her Ladyship gave £100 to the Lancaster Girls’ Grammar School to found an exhibition for the fostering of the study of domestic economy.

The funeral took place privately at Lancaster Cemetery, on Tuesday, preceded by a service in the Cemetery Chapel, conducted by the Rev. John Goldsborough, Minister of the Greaves Methodist Church, Lancaster, who also performed the final rites.