With Scoutmaster R E Wright (right) and PL Herbert Dobson MM (3rd from right), by Galgate Post Office, June 1910. According to the Ordnance Survey map of 1910 the post office was then situated in Salford Road. You wouldn’t catch them standing in the road today! 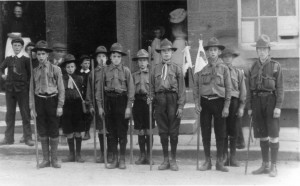 6th Scout from the left is William Thompson who also won a Military Medal in the First World War and was the last Chief Constable of Lancaster. On his right is Robert Bowker.

The 4th Lancaster Boy Scouts, under Scoutmaster Wright, have encamped at Hazelwood, Silverdale, this week.