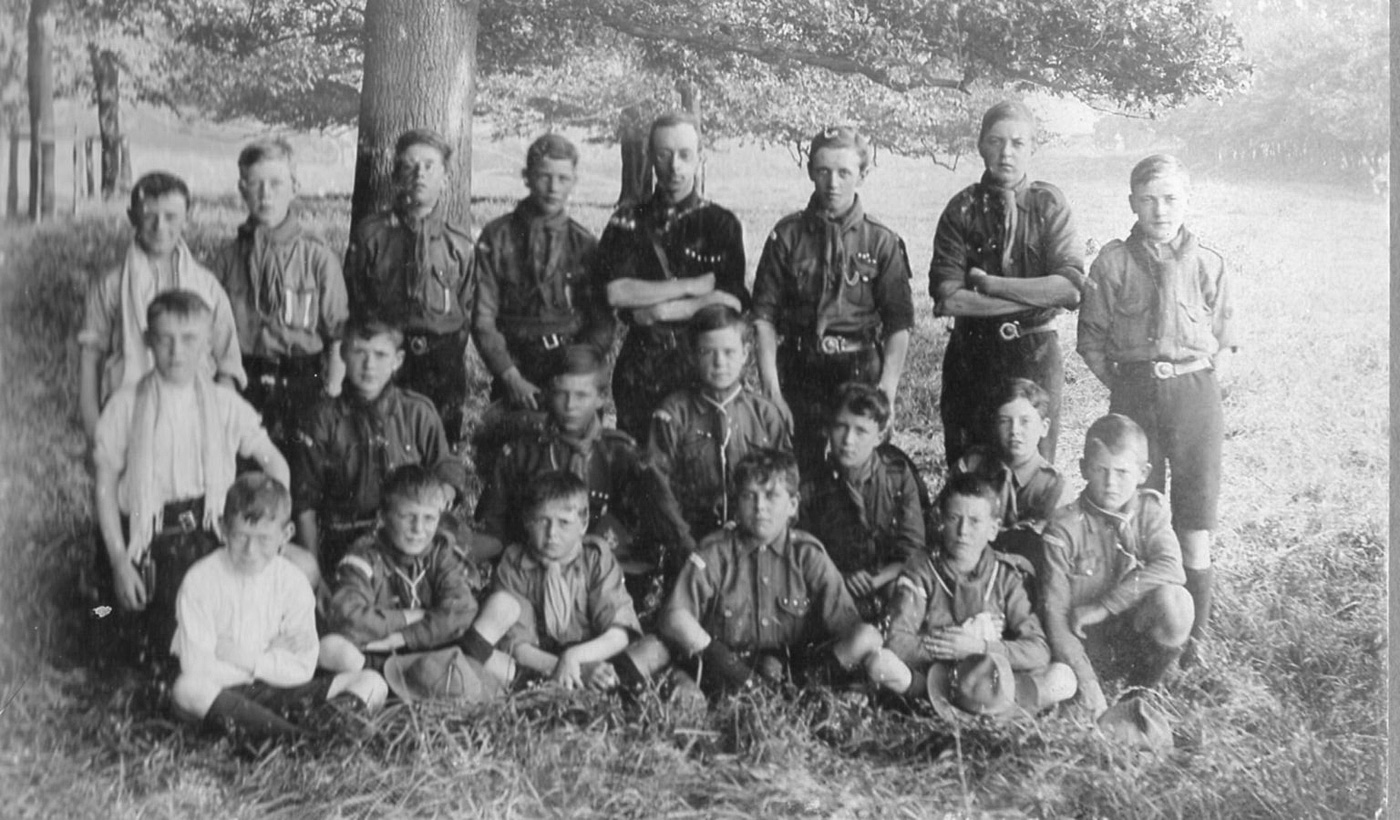 Per Peter Gedge’s notes “Founder of the 4th Lancaster Group (Sulyard Street Methodist) + Scoutmaster from 1909 until 1930. – see “the beginning“.

First Chairman of the Lancaster Scout Association in 1910 & Secretary from 1911.

On Friday night last, shortly before eight o’clock, information was received at the Fire Station, Lancaster, of a fire at the residence of Mr. Wright, Regent-street, Lancaster, clerk to Mr. N. W. Helm, C.C., at the Halton Mills. The fire brigade promptly turned out with the fire escape and tender, but when they got to the house the outbreak had been almost extinguished by the neighbours, but not before damage had been done amounting to nearly £100. It appears that Mr. and Mrs. Wright were out and the children were in bed. The servant girl went to answer a knock at the door, and in her temporary absence from the kitchen some clothes hung by her mistress near the fire were blown against the flames and at once blazed up. The kitchen was soon all ablaze. The servant fetched down the children, took them into a neighbour’s house, and raised an alarm. The house and furniture were insured.

BEEN TOGETHER FOR FIFTY YEARS

Many congratulations and a personal visit from Sir Norval Helme, marked the golden wedding of Mr. and Mrs. Thomas D. Wright, of 32, Regent Street, Lancaster, which took place on Monday.

Mr. Wright, aged 76, is the second son of the late Mr. William Wright, who for so many years acted as surveyor for Messrs. Austin and Paley, architects, of Castle Park, Lancaster.  Along with his brother, the late Mr. Samuel Wright, ex-Mayor of Morecambe, he attended the Royal Grammar School, Lancaster, and both gained the Queen’s Prize before leaving school .

After his schooldays, Mr. Wright served his apprenticeship as a chemist with Messrs. Whimpray and Cardwell, now Messrs. Bate and and Gorst, of Market Street.  As he grew older he went into business as a chemist on his own account at Southport.  While there, he married Miss Frances S. Simpson, daughter of the Rev. Samuel Simpson, the Wesleyan minister, of Lytham St. Annes.  Mr. Wright returned to Lancaster to take up an appointment of chemist at Messrs. J. Helme and Co., Halton, over 40 years ago, and he has occupied that position ever since.

An ardent Wesleyan Church worker, Mr. Wright devoted the bulk of his spare time to religion and for a great number of years acted as Young Men’s Society leader.  Another of his activities took the form of local preaching and he is one of the most welcome preachers in the district.  Many of his former pupils are now prominent businessmen in the town.  He has two sons living, Mr. W.H. Wright, of Driffield, Derbyshire, and Mr. R. E. Wright, who works with his father .  Mr. R. E. Wright is the Assistant District Commissioner for the Boy Scouts of Lancaster and has served nearly 21 years with the 4th Lancaster Troop.

Mr. and Mrs. Wright have received a token of appreciation from the firm of Messrs. J. Helme and Co., of Halton, and the workpeople at Halton sent a congratulatory telegram.

Obituary of the Week 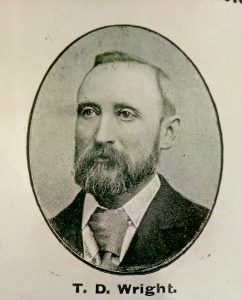 Mr. Thomas David Wright, of 32, Regent Street, Lancaster passed away on Tuesday at the age of 84 years. Mr. Wright was taken ill on Christmas morning.

Deceased was the second son of Mr. William Wright, a gentleman very well known to the older generation of business men in Lancaster and district, and who came to Lancaster as surveyor to the firm of Messrs. Paley and Austin, being associated with that firm of architects in their most important work. (Note- William was born in Knutsford; also the birthplace of Edmund Sharpe the founder of Sharpe, Paley & Austin)

He was educated under the Rev. Dr. Lee at the Lancaster Grammar School where he secured a fair share of successes including the Queen’s Prize. Leaving school he was apprenticed to Mr. John Lever Whimpray, chemist, Market Street, Lancaster, and later was for a time in business in Southport. Returning to Lancaster in 1889 to become chief chemist to Messrs. J. Helme and Co., Halton Mills, he was with that firm until his retirement from active work.

Like his father, Mr. Wright was a devoted Wesleyan Methodist, and rendered splendid service, particularly at Mornington Road Church, Southport, and at Sulyard Street Church, Lancaster. He was specially interested in the welfare of young men, and had been an enthusiastic worker in the Wesley Guild.

For many years he was the Badge Secretary for the Lancaster Boy Scouts’ Association and acted as an examiner for certain badges. Whilst his chief hobby was stamp collecting, he was also a keen naturalist, specialising in birds and flowers. In his younger days he was an expert ice figure skater.

He married, in August 1880, a daughter of the Rev. Samuel Simpson, a prominent Wesleyan minister of his time, who was a son of the Rev. John Simpson, one of John Wesley’s preachers. She survives with two sons, Mr. W. H. Wright and Mr. R. E. Wright, who reside at Crewe and Lancaster respectively.

Mr. and Mrs. Wright celebrated their golden wedding in August 1930.

The funeral is to take place at the Lancaster Cemetery this (Friday) afternoon after a service at the house.

In 1939 Robert is living with his widowed mother at 32 Regent Street, Lancaster. He is a Chemist (Leather cloth).

I HAVE spent many happy times at Sulyard Street from time to time with the 4th Lancaster Scout Group.

The other evening I went along to what seemed to be just another of those displays which we have seen many times – an open night at which visitors were privileged to see something of the training given to Scouts and Cubs. But during a break in the proceedings, the arena was suddenly cleared and Group Scoutmaster William Tyson took his stand at a table, to give us the surprise of the evening.

In a brief speech he told us Mr. R. E. Wright had decided to retire from active association with the Group dating back to 1909. Thirty-five (sic) years was a long spell and they desired to pay tribute to all that Mr. Wright had done for Scouting and particularly  the 4th Lancaster. He had been most popular with everybody and would always be remembered wherever there were Scouts. They had therefore invited parents, Cubs, Scouts, Senior Scouts, Rovers and Guilders together to say thanks to Mr. Wright. Personally he had at all times found Mr. Wright most helpful and had learned much from long service with him.

He asked Mr. Wright to accept an armchair with thanks for the memory of good times spent with the Group. He was to regard him self as a life-member of the 4th and they wished him good health and happiness.

Mr. Wright, obviously touched by the gesture of affection, said he felt the time had come for him to make way for younger men. They were a grand set of lads and though he had severed “active” Scouting with them he would not be happy if he could not come among them now and then in uniform. He was leaving Mr. Tyson at the helm and all would be well. Seated in the chair, amidst applause, Mr. Wright said that he would be able to read “The Scouter” at ease and follow the exploits of the Group. — AKELA