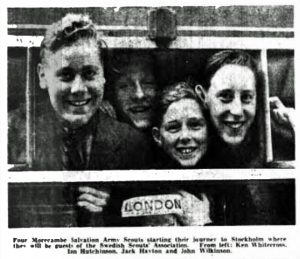 SCOUTS from the 2nd Morecambe (Salvation Army) Troop will have the honor of forming the biggest part of the British contingent at the Swedish National Boy Scouts Association camp at Stockholm.

“This British contingent may be the only foreign party attending the camp,” said the Scoutmaster of the Morecambe troop, Mr. Albert Mortimer, when he and eight scouts of his troop left Morecambe by rail for London on the first leg of their journey last Saturday.

Mr. Mortimer, aged 45, of Ashton Road, Lancaster, an engineer at Jas. Williamson and Son Ltd., will be in charge of the British contingent. In London he and his party were to rendezvous with six other scouts, making up the contingent, who were from County Durham, Northants, Clacton, London and Stockport.

“We read about the invitation from the Swedish Scouts Union to English scouts to attend this camp, in a communication from our Headquarters,” he said. I put the names of some of my Morecambe scouts before the officials at Headquarters, and they were accepted, probably because of their good scouting record for they are all at least of first class badge standard.