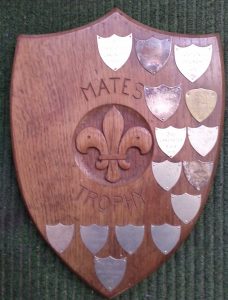 The “Mates Trophy” appears to have first been competed for in 1972. It was presented to the winning Troop in the annual Scout Sports Competition – the one that had gained the most points in all the various events. These included all the usual running and field events.

Looking at the shields on the trophy the past winners have been:-

Newspaper reports indicate that both Lancaster and Morecambe had had Scout Sports competitions previous to 1972. A report in the Morecambe Guardian of 22 July 1939 records that the event that year was the 15th annual competition.