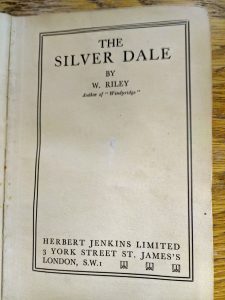 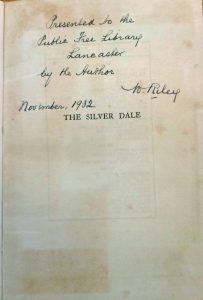 I do not suppose it would have occurred to me to write about our short cuts if I had not run up against my good friend, Cheeryble. I met him at the point where the lane to The Row leaves the Carnforth high road, and I need scarcely say that the name I have given him is not that by which he is known to his wife and the postman, but if there was ever a man who was in the direct line of descent from the famous brothers it is surely he.

“Cheery,” as my girls call him, is past his prime; and a greyish, somewhat untidy beard, with the head of hair to match, make him look older than he really is; but as an offset to these attributes of age, merry, twinkling eyes and a mouth that seems always on the point of curving into a smile put him (as he himself phrases it) into the big lads’ class. Sturdily built and heavy, you might take him for one of our Samsons, but this is another deception.  He has a weakness of which he never speaks, a thorn in the flesh which, after the manner of thorns, pricks in secret.

“Going by the short cut?” he enquired, as he gripped my hand in his big fist and shook it vigorously.  “The man who doesn’t know our short cuts doesn’t know the Dale.”

” The Portuguese have a proverb,” I replied, “which runs: ‘Don’t quit the highway for a shortcut.'”

“Let ’em keep it in Portugal,” came the prompt comment.  “Now I’ll agree that the longest away round is often the shortest way home for the lover and his lass, but give me the short cuts every time.”

I accommodated my stride to his and we turned up the lane.  “I did not know that you belonged to the By-path Meadow brotherhood,” I said; “and I’m surprised that a church officer should be so ready to leave the King’s highway.”

He stopped, and leaned against a gate that offered convenient support.

“The worst of a lot o’ men is that they speak without thinking,” he said humorously; “but I’m surprised that you are among ’em.  I’ve no use for by-path meadows that seem to lead you somewhere and bring you up at a dead end.  The short cut is the road our fathers built to get them to their destination as quickly as possible.  They had neither time nor money to waste, so they cut  their road in as straight a line as they could, up hill and down dale, till they came to the spot they aimed at.  Bunyan’s highway was like that, and that’s why it was a pleasant way in spite of its difficult hills and rough places. ”

“It’s mine to the last hole,” he replied confidently.  “It was the lazy, haven’t-time-to-stop-a-minute fellows who said ; ‘Blow these short cuts!  We must have level roads that you can spin along at a great pace; broad roads where you can go four abreast; smooth roads that’ll neither hurt feet nor wheels nor tyres.’ Progress without effort – that’s what mankind wants!  Everything made easy.  Why, man alive, if old Bunyan was here today he would have a By-path Meadow tar-mac’d!”

“Carry on, when you get your breath,” I said again.  “I’m under instruction.”

“You set me going,” he answered.  “Folk talk as if the shortcut was the way to perdition, instead of bearing in mind what the Book tells ’em that it’s the broad road that takes them there, and the narrow they’ll have to follow if they want to get to the Celestial City – aye, or to any worth-while goal for that matter.  The short cut is often the roughest and hardest, but it’s the straightest, and it pays you for your trouble as you go along.”

“You are right there,” I agreed; and he wagged his head mischievously.

“I’m right because I think for myself,” he said, “instead of filling my head with this mass-production stuff.  When old fogies tell you there’s no short cut to success they’re talking parrot-talk.  The short cut – the straight, hard road over the Hill Difficulty and down into the Valley of Despair, and up again and down again, but always straight on – is the only road.  The easy, roundabout road is the road to failure.”

“Take your time,” he replied.  “You wound me up, and you’ll have to have patience till I run down. ”

I laughed and assured him that I was in no hurry.  “The best rewards lie along the short cuts,” he went on. “You miss the Delectable Mountains, and Beulah Land *, and the green pastures and still waters, if you go by the tar-mac route. Now, come – what about that foreign proverb of yours? You are not a highwayman, I know.

“I agree heartily,” I said, that to see our Dale at its best and fairest you must quit the main road, though it means slow travelling, and there are lots of proverbs to justify the lagging foot.  ‘Haste is of the Devil’ , says the Koran , and Seneca, I remember, said that it ‘tripped up its own heels.'”

“That was a good ‘un,” said Cheery approvingly.  “I’m a slow traveller myself, so I don’t trip and I don’t tire my eyes.  I see. “Now you’ve been on this lane oft enough.  Do you know there’s a mountain pass just behind your back?”

He took me by the arm and twisted me round and I saw what he meant. The gate opened on to a waste of bracken-covered, uneven land that stretched up to the “pass” my friend referred to – a miniature defile that was like an artist’s painting. There were limestone crags on the one hand and on the other grassy mounds whose slopes were partly hidden by clumps of fern – a pleasing little picture in quiet tones.

” A bonny bit – that,” said my companion.  “A slow foot, an open eye, and an enquiring mind – that’s what you need to enjoy the short cut.  And don’t forget to turn, often”

We moved on, and now for a while his tongue was still and I was left to my reflections.  What he had said was true enough, yet it is also true that our high roads are not main roads; they are themselves little more than by-ways – channels that leave the main stream of traffic at Carnforth and after many windings join it again at Milnthorpe; and if you must needs travel in defiance of the Devil our Silver Dale will still have much to offer you.  All the same Cheery is right, for its choicest entertainment, its hidden treasures, are for its intimates, and for them alone.  The shortcuts prove it.

The lane is narrow, as such lanes ought to be, and though it rises fairly quickly it is by gentle undulations that make it easy for you to forget that you’re climbing, and exact such small payment that few travellers would be conscious of any impoverishment.  At the lower end the hedges on either side are high, obliterating the view, and the ditches are filled with ferns; but by and by quick-thorn and elder give place to low stone walls, the ferns wave a farewell from the shadows, and you find yourself at the top of the rise with the golf-course scrambling up to the sky in front of you and sprawling down to the high road ever so far below.  Scrambling and sprawling are not terms of derision, you must understand, but they are descriptive of the course, which has very little in common with the links or St. Andrews or St. Annes.  Ours is a mountainous and “sporty” ground and some followers of the royal and ancient game, who are accustomed to level fairways, are disposed to agree with the judgment of the fifteenth century Scottish Parliament that “golfe is an unprofitable sportis” when their balls hide themselves effectually among the limestone rocks.

Cheery pulled up beside the ragged ash trees that sentinel the course.  “Look at that!” he exclaimed.  “After the struggle, the reward!”

I was already looking.  Such scenes, however familiar, are always fresh, and now I was to see the picture through Cheery’s eyes.

” ‘All the world’s a stage,’ he said, “and this is my little theatre where I come, summer and winter, to see the play.  This low wall is where the footlights are, and this big playground is the stage where the actors move to and fro, hitting their little balls about, and speaking their parts.”   He paused and chuckled. “Aye, aye, speaking their parts, and funny little parts some of ’em are – short, and with a lot o’ feeling behind ’em.  Man alive! they don’t know they’re acting for me! they don’t know they are showing me their characters; they don’t know what pleasure and profit I get from watching them.  They all come up here in their turn, you know, on to this green, and then disappear into the wings.”

He chuckled again.  “A theatre with free seats, and the only entertainment tax the bit o’ breath you lose.

His face was aglow and I looked at him admiringly.

“And there’s more than that,” he went on.  Look at the background God paints for the scenery.  Man alive! look at it!

In his enthusiasm he took my arm and pinched it until it hurt, but I could not have been looking more intently.  There was a glorious light on the woods and hills and on the “mosses” that lay like a faintly blue lake at their feet.  In the middle distance Trowbarrow loomed large, displaying its beauty and its wound; and away in the mists were the shadowy mountains.

“Man alive! said Cheery; “there are no words for it!”

We remained there until the stage emptied, and then went slowly on our way.  The road drops quickly when it leaves the golf-course and it opens on to a half-circle of swamp (Bank Well), a small sheet of water that is now so full of rushes that the ducks that waddle across from their habitations behind The Row find scant accommodation there.  The pool has a background of low trees, varied in colour and of graceful outline, and it is almost the last of the lane’s attractions, for in a few yards it dips still more steeply and winds round to The Row and the high road.  My own shortcut would have led across the fields to the red roofed house that lies snugly in its green cradle at the foot of Castlebarrow; but I parted company with my friend at this point and turned back up the lane.

One more short cut and my home is reached. A short stretch of high road, a lane a few yards long that, passing through a farm yard, dwindles into a field path and you stand where you obtain one of the most extensive of all the Dale’s panoramas. It is not the finest, though it is unquestionably fine, and if you do not see quite the whole of the Dale the little that is omitted is of small significance. You turn your eyes westward and the sea and Furness hills greet your gaze. You turn them northward, and they sweep over the fells of Heathwaite, the bare breast of the giant Knott, the bosky, whales-back form of Castlebarrow and the Eaves Wood. Following the eastern curve they rest on Farleton and Fairy Steps and the greater heights beyond. There is Trowbarrow again and the lofty craglands of Warton and the Yealands. And below this glorious framework there is the Dale itself – a big parkland, a rich and goodly land.

I agree with my friend Cheery that the Wise Man of Portugal was not as wise as he thought himself.

Places in The Pilgrim’s Progress (John Bunyan) – The Land of Beulah, a lush garden area just this side of the River of Death.