(a) The recruit should find out about the adventurous life and achievements of our Founder, and something of the history of the movement. (Note: This will not be tested.)

(b) Know the Scout Law and Promise and their meanings in accordance with his age.

(c) Know the salute as given in Camp Fire Yarn 3 of Scouting for Boys.

(d) Know the composition of the Union Flag and how to hoist, break and fly it.

The recruit should be able to clean a wound, and make and apply a dressing.

Make the woodcraft signs given in Camp Fire Yarn 4 of Scouting for Boys.

Demonstrate how to make the following knots: reef, sheet bend,clove hitch, bowline, round turn and two half hitches, sheepshank, and explain their uses. Whip the end of a rope.

(2) A Scout is loyal to the King, his country, his Scouters, his parents,his employers, and to those under him.

(3) A Scout’s duty is to be useful and to help others.

(4) A Scout is a friend to all, and a brother to every other Scout no matter to what country, class, or creed, the other may belong.

(7) A Scout obeys orders of his parents, Patrol Leader, or Scoutmaster, without question.

(8) A Scout Smiles and Whistles under all Difficulties.

“On my honour, I promise that I will do my best

To do my duty to God, and the King

To help other people at all times

To obey the Scout Law.” 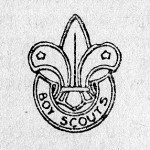 From: FIRST STEPS IN SCOUTING – HOW TO PASS TENDERFOOT AND SECOND-CLASS TESTS.