Caleb was a Mechanical Engineer at a Linoleum Factory. 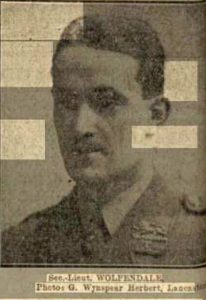 MILITARY CROSS WON AT AGE OF 19.

HONOUR FOR LIEUT. W. A. WOLFENDALE.

The first Military Cross conferred upon a local Territorial is bestowed upon Second-Lieut. William Atkinson Wolfendale, who was mentioned in Sir John French’s despatch on New Year’s Day. This gallant young officer was only 19 at the time he earned his distinction, having just attained his 20th birthday. He is the son of Mr. and Mrs. Caleb Wolfendale, of Howe Ghyll, Lancaster. Educated at the Friends’ School, Lancaster, and trained as a dentist, he obtained a commission in the 5th King’s Own Royal Lancaster Regiment on the outbreak of the war, being gazetted second-lieutenant September 5, 1914, and he relinquished his professional examination. Being too young for Imperial service when the 1st/5th joined the Expeditionary Force, he assisted in raising the 2nd/5th, and at Altcar qualified as a first-class machine gun instructor. Rejoining his regiment at Sevenoaks, he was one of seven officers who went out in March last, taking the place of another officer at a day’s notice – five of the seven being quickly returned in the casualties.

He saw some of the hardest fighting in which the 5th King’s Own were engaged around Hill 60 near Ypres, including the charge across a fire-swept plain when the local territorials suffered very heavily. He was only at the front seven weeks but from what can be learned he was in some tight corners.

The particular service which has brought him distinction is not definitely known. It is stated, however, that he held on for 24 hours in charge of his machine gun when the enemy were pressing. Those around him suffered heavily, though his gun was twice put out of action by enemy fire, and though his clothing and accoutrements suffered considerably from rifle fire, he kept his gun going, and beat off a concentrated attack of the enemy through a breach in a fence which was being used as a screen for the enemy’s fire. Shells were dropping in closer range meanwhile, and eventually one blew up the parapet from which he was working, demolishing his gun, and burying the gallant young lieutenant.

In his tight corner where he had been holding on, he had been missed from the regiment, and was found in the nick of time by officers. He was thought to be gassed, and sent to hospital at Boulogne, but it proved to be a case of concussion. He was 10 months in hospital in England, and he is now with the 3rd/5th Machine Gun Section .

His father is chief engineer at Lord Ashton’s Works. 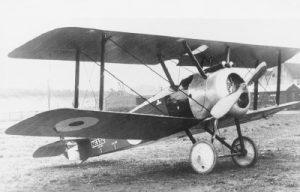 Major W. A. Wolfendale, of Morecambe 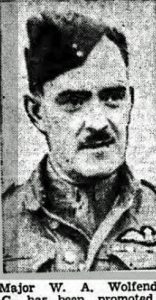 Major W. A. Wolfendale, M.C., has been promoted to the rank of Lt-Col., and is now Officer Commanding of the 4th County of Lancaster (South Lonsdale) Battn. Home Guard.

Lt.- Col. Wolfendale enlisted in the 5th Battn. the King’s Own Regiment on the outbreak of war in August, 1914. He was commissioned on the 5th of September, 1914, and trained as a machine gun officer. In May, 1915, at the Second Battle of Ypres he was awarded the Military Cross and received a mention in despatches. After further service in France he transferred to the Royal Flying Corps as it was in those days and in 1916 trained as a pilot.

He went to France in 1917 with 80 Squadron. During the last year of the war he served with 78 Squadron, and there he was engaged in night flying on the London defences. Demobilised in 1919, Lt.- Col. Wolfendale completed his studies at the Royal Dental Hospital, London, and commenced his dental practice in Morecambe in 1922. A  keen sportsman, he became a popular member of the Morecambe Golf Club, and also of the Morecambe Bay Wildfowlers Club, of which he is a vice-president.

JOINED HOME GUARD AS A PRIVATE

When the Secretary of State for War broadcast his appeal in 1940 for Local Defence Volunteers Mr. Wolfendale immediately joined as a private. The subsequent organisation of the Volunteers into companies, calling for experienced men to take command, Mr. Wolfendale’s record obviously merited his appointment as Company Commander and he took over command of “H” Coy, where he did a considerable amount of work not only in training his own company but in attending various courses and travelling round the various companies to give to their personnel the benefit of his studies and experience at the training schools.

On the death of the Lt.-Col. Bois, D.S.O., M.C., Mr. Wolfendale was appointed Senior Major and second in command to Sir Henry Darlington, who had assumed command of the Battn. Sir Henry resigned on the 30th June 1943, and Lt.- Col. Wolfendale has been in control since that date

GUESTS of honour at the Morecambe and District Royal Air Force Association dinner-dance at the Grosvenor Hotel on Wednesday night were the Mayor and Mayoress of Lancaster, Coun. and Mrs C. B. Treu.

It was the seventh Association dinner for the 150 high-spirited members present, many of whom served in the Battle of Britain.

The president Lieut.-Col. W. A. Wolfendale, M.C., could not attend because of ill-health.    (continues)