A CEREMONY at Lancaster’s Giant Axe Field on Saturday inaugurated construction of £28,000 new headquarters for the 13th Lancaster Scout Group.

The group had to leave its old headquarters in Bulk Street in 1970 when the building was pulled down to make way for the planned Eastern Relief Road. Since then, they have been accommodated in a basement below Trinity United Reformed Church off Middle Street.

This “temporary stop-gap” has lasted nearly 19 years, although the basement is not ideal, as pillars interfere with games, it is small and it is distant from outdoor play areas.

The search for a new location and for funds to support a move has been going on for many years. Most recently, a site at Wingate Saul Road was identified, but planning permission was refused and an appeal to the Department of the Environment was unsuccessful.

Now, the city council has allowed the group to lease a small piece of land at the Giant Axe Field on which the new headquarters will be built. The prefabricated building will be 24ft by 54ft. As well as a good sized main hall, it will include a kitchen, toilets and large store for equipment.

Of the total cost, 75 per cent will come as a grant, via the Lancashire Council for Voluntary Youth Services, from Lancashire County Council. The group must raise the remaining £7,000 by its own efforts, the main contribution being a regular local waste paper collection. Meanwhile, the group has a loan of £5,000 from West Lancashire County Scout Council.

The foundation and base of the building were expected to be in place this week with construction in late February, internal work during the spring and opening for use by the summer. 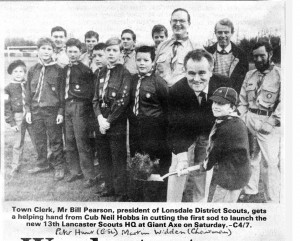