They were collecting for the Children in Need appeal and raised more than £4,250.

The collection was organised by the Lonsdale District Scout Council, whose Commissioner, Mr Peter Ellwood, presented a cheque at the BBC TV studios in Manchester the same evening. 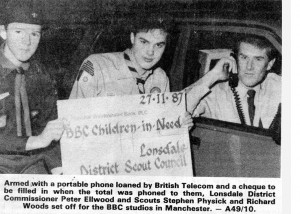