A colony of strange animals has taken up residence in Lancaster.

They are ‘Beavers’ – but not the furry kind, although their activities are just as industrious.

Beaver colonies are the latest – and youngest – group to join the Scout movement. They comprise boys between six-eight years old who are still too young to become Cub Scouts.

Unlike the cubs and scouts, the beavers do not wear uniforms or go on camps. The emphasis is on fun and games with craftwork and topical projects thrown in.

And everything is carried out under the watchful eye of White Beaver, Mrs Cynthia Richardson, and Brown Beaver Mrs Marjorie Lees.

Scout Group Akela Mrs Susan Parkinson said the new group had already got off to a good start.

“We have ten boys at the moment,” she said. “But we are hoping to double that number once we are organised. It is a group which needs a lot of parent participation.

Further information on the group can be gained from Mrs Richardson on Lancaster xxxxx. 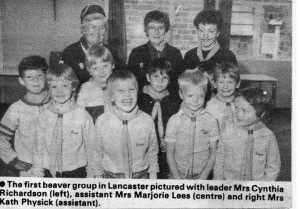