AFTER preparing hundreds of young people for Scout and Guide awards, five local Scout leaders have been given some of the limelight themselves— by being awarded the Medal of Merit for outstanding services to the movement over many years.

Chairman of the 16th Lancaster (St Paul’s) Group, Mr Peter Hewitt, and Mrs Maureen Meinert, Assistant District Commissioner for Cub Scouts, will be presented with their medals — for which they were recommended by the County Commissioner — at the district annual meeting in Lancaster Town Hall on May 23.

Mr Hewitt has been associated with the 16th Group since 1968 Chairman since 1981, he has worked energetically to develop Scouting in the area and has seen the group grow to more than 100 members. He is loyally supported by his wife, Stephanie.

Becoming an assistant leader in her father’s Cub pack in the 16th Lancaster Group at the age of 18, Mrs Meinert worked with it for 17 years. Her Maclean Pack won the District Trophy for three successive years and last year she succeeded Mr Wall as Cub Scouts ADC. It was through Scouting that she met her husband, Stewart, and they live in Forton with their two daughters.

Mr Bill Greene. a local builder, of Borrowdale Road, Lancaster, became a Scout leader in the 13th Lancaster Group in 1963. In 1981, he revived the Venture Scout section, whose members recently gained a record number of six Queen’s Scout badges. At the same ceremony, Mr Greene was presented with his Medal of Merit.

A Cub Scout leader for 20 years in Southport and Lincoln, Mr Frank Rice came to Lancaster in 1977 to join the local Probation Service. Taking over the 33rd Lancaster (St Luke’s) Group, he has established it as a flourishing Sea Scout unit and witnessed the opening of new headquarters and a boathouse in 1983.

Moving to Torrisholme to work at Heysham power station in 1975, Mr Geoff Westwood, who had previously run Scout troops for 10 years in Cardiff and Almondsbury, became District Scout Leader. He has been Assistant District Commissioner for Scouts since 1983, and has seen the section increase this year to nearly 400 boys. His wife, Gay, helps with St Chad’s Cub Scouts.

Mr Rice and Mr Westwood will receive their medals at the County Rally, to be held at Waddecar Camp, near Preston, next month. 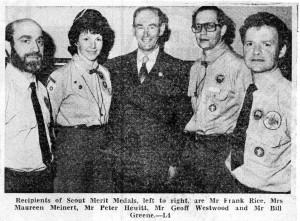