The presentation, made by County Commissioner Mr Bob Sutton, marked the culmination of 2 years of work — and enjoyment — for the six youngsters, from the 13th Lancaster Castleton Venture Scout Unit.

But in addition, the occasion saw the 13th Group break their own record for the number of Queen’s Scout Awards gained at the same time in the Lonsdale District. Previously it had stood at five, a record which the 13th— the oldest group in the district had held for some 15 years. 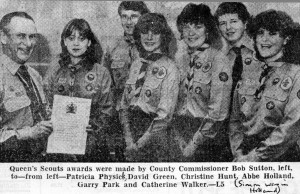 Among the various activities that the young men and women undertook were: salmon stripping on a North West Water Authority fish farm as part of a conservation project; visits to the mosque on Blades Street to learn about other religions and communities; staging and taking part in a pantomime; training for and passing a basic canoe
certificate; helping to run junior sections within the scouts, and helping other organisations within the city.

All the ventures took part in practice hikes in various parts of the country — with the exceptions of Christine and Patricia, who did theirs in the Canadian Rockies and Austria respectively — before embarking on the full 50 miles in the Lake District.

As part of their birthday celebrations, the 13th group will be holding a reunion dinner at the Royal Kings Arms Hotel, Lancaster, on Saturday, May 11, and an invitation is extended to former members from the group’s 60 year history to attend.