Each troop was represented by a four to six strong patrol who had to pitch their own tent, erect a camp dresser and construct an altar fire on which they had to cook a full English Breakfast.

Individual troops also carried out their own programmes including building rafts, bridge building, making model hot air balloons, bark rubbing and surveying — the flora and fauna around the camp site.

On Sunday a mock rescue was carried out from nearby hills and field sports took place between a number of the troops.

Assistant District Scout Commissioner, Mr Geoff Westwood, said the aim of the competition was to test the ability of the Scouts to look after themselves and work together as a team. 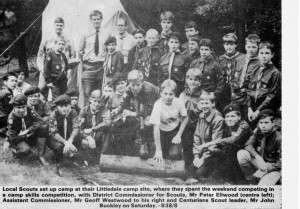