TWO Queen’s Scout awards, 10 Chief Scout awards and 180 Gold Arrows were obtained by boys during the Lonsdale District Scout Council’s 75th anniversary in 1985, it was reported at the annual meeting at Morecambe Town Hall.

District Commissioner, Mr. Peter Ellwood said the census had again showed an increase in the Scout section, but the falling birthrate had affected Cub Scout numbers. 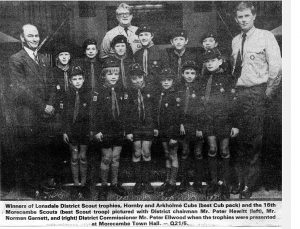