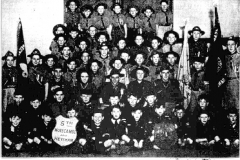 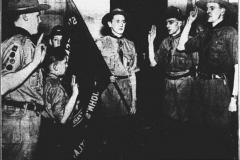 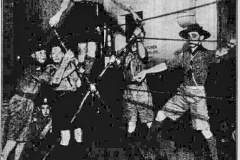 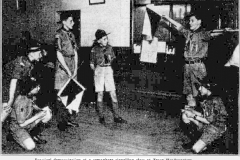 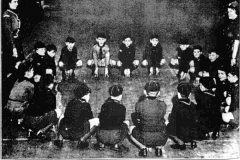 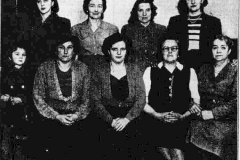 “BE prepared” is the official motto of the scout movement, but “Be progressive” could be even more appropriate for the 5th Morecambe for within less than two years the Troop has grown from a handful of boys meeting in a hut on the back of Lordsome Road to a Troop with a membership of 31, six patrols and a strong first-class senior section.
It has not only grown in numbers but the boys who have joined have progressed with their Scouting, so much so that within the first ten months the Troop had carried off the coveted Lupton Trophy and the Indoor Sports Shield, and they retained both trophies for a second year.

The Troop was formed after the 12th Morecambe disbanded, by the Rev. T. Cooper, curate of St. John’s Church from 1944 until October 1947, when he left the district. Mr. J. C. Walker, a member of the 7th Morecambe, left his own Troop to take up duties as S.M. of the 5th, and in spite of the fact that he was in the R.A.F., and was only able to be with the Scouts at weekends and on leave, he managed to keep the Troop going until the return of Mr. Geoffrey Colwill, present Scout Master, in 1947.

The first meeting under Mr. Colwill was attended by five members, B. Gray, B. Gorst,  J. Lamb, B. Powell and P. Woods in March 1947, plans for the future were discussed and it was decided to keep the two patrols Beavers and Peewits with J. Lamb and B. Gray as P.L.’s

During the next month the Troop increased in numbers to such an extent that during the collections for “Aid to China” they were able to supply collectors at the Palace and Whitehall cinemas every night. Two old members of the Troop returned R. Mills and E. Watson, and with the enlisting of S. Mogg formed a seniors’ patrol with R. Mills as Troop leader and E. Watson as PL.

The Troop’s first camp with 24 Scouts and four seniors was to Hawkshead in July and they returned home with an excellent report as a result of which the Troop’s reputation got a terrific boost.

Training continued steadily and began to show results. All the seniors passed their Second Class and so did some of the Scouts. Two more patrols, Seagulls and Otters were formed with P. Woods and D. Priestley as PL’s. In November a team entered for the Inter-Troop Indoor Sports competition and were successful in winning the shield. By December it was apparent that the hut would not accommodate the increased numbers. The Troop then numbered about 40 members, and the Church allowed the use of the Parochial Hall.

January was a red letter month for the Troop won the Lupton Trophy, an excellent achievement for a Troop formed only ten months earlier and another notable fact was that the Kestrel Patrol was to be formed.

Six members did their First Class Hike in April and at the St. George’s Day campfire all but one receive their badges. A team was entered in the Scorton Rally in May and although unsuccessful in winning the cup were well placed.
At the display in August to celebrate the 40th anniversary of Scouting the Troop set up a record for assembling and dismantling a monkey bridge in six minutes.

A new ruling came into being with patrols re-organised and non-attenders considered lost to the movement. It was considered that this would set the competitions for the patrol trophies on a much fairer basis. In October Mr. H Rossinger, an Austrian, paid his first visit to the Troop and it was hoped he would take on the duties of A.S.M. In November, for the second year, the Troop won the Driver Shield for indoor sports and succeeded in winning five first places, one second and one third.

Another honour fell to the Troop when Patrol Leader P. Woods won his Backswoodman’s badge and his Scout Cords-giving him the distinction of being the only Scout in the town with these awards.
In January this year the Troop carried off the Lupton trophy again another feather in its cap.

Rehearsals had also been taking place for the Gang Show since December last and on the opening night on February 21st at the Parochial Hall, the show was a terrific success. Cheques amounting to £7 10s. were presented to St. John’s Church for the gift day and the local Association. The opening night of the Gang Show will long be remembered by S. M. Colwill for his wife gave birth to a baby boy on that date.