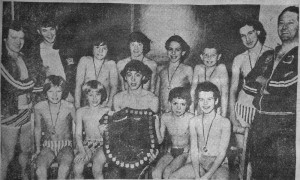 LONSDALE District Scout swimming team were the winners of the Helme Shield, in a North Lancashire competition recently.

The competition also included entries from Chorley, Preston, Wyre, Blackpool and Fylde – and the victory was Lonsdale’s second in 15 years.

The shield was presented to the team captain, Lee Whitworth, from the Mayor of Chorley, Councillor J. Glynn.