William Briggs, 1858-1928, was the second son of Robert and Mary Ann Briggs nee Balderston of Morecambe.

Robert Briggs, the father, was a Master Mariner and Captain of the Midland Railway Company’s steamer “Talbot”. In 1864 he was presented with a testimonial, on board his ship at Morecambe, in the form of a telescope with silver mounts as an acknowledgement of “the bravery and humanity displayed by him in rescuing the officers of the ship “Lillies,”” which was wrecked at the mouth of the Lune during a gale in November 1863.

The following inscription was engraved on the telescope:-

“Presented by the Board of Trade to Mr. Robert Briggs, master of the steamship “Talbot”, in acknowledgement of his meritorious exertions in saving life from shipwreck.”

Later, in 1881, Robert is in the trade directories as a Lloyds agent living at 11 St. Leonardgate.

William Briggs trained as a chemist in London and had premises as a chemist & druggist at 21 Cheapside in Lancaster in 1886. At that time he was living at 94 St. Leonardgate. In 1901, then retired from business, he was living at 25 South Road and in 1911 at The Vale, Skerton *. He was Mayor of Lancaster for six consecutive years, from 1913 to 1919. There is a portrait of  Ald. Briggs and one of his wife Mary Alice, neé Stanton, in the Mayor’s Parlour at Lancaster Town Hall.

* The Vale was a large 16 room house to the North side of Torrisholme Road and just to the East of the railway line – the area where Edenvale Road is today. 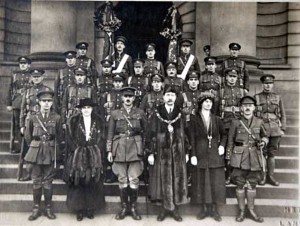 Return of the Cadre of the 1st/5th Battalion, King’s Own, who had spent time in Ireland after they had left Belgium in the summer of 1919. Officers of the regiment are joined by the Mayor of Lancaster (Ald. Briggs) and others on the steps of Lancaster Town Hall 16th October 1919. Photo © King’s Own Royal Regiment Museum, Lancaster

MAYOR OF LANCASTER THROUGHOUT WAR.

The death occurred at Lancaster, yesterday, of Alderman William Briggs, who was Mayor of Lancaster, his native town, during the whole of the war period. He had been a member of the Town Council since 1905, and was made an Alderman in 1923. He took an active part in public philanthropic work and had served as president of the Royal Lancaster Infirmary and other local institutions. In his younger days he was a popular amateur actor.

He received the O.B.E. for his services as war-time Mayor.

In 1914, a gift of a chain for the Mayoress and any future Mayoress to wear was made by the Mayor of that year, Mr. William Briggs. In fact William Briggs and Mrs. Briggs were Mayor and Mayoress for six consecutive years, from 1913 to 1919.

The pendants are linked by a double gold chain, interspaced by links of the Rose of Lancaster, sets of rubies or sets of opals. There is an inscription on the rear of the back pendant, which reads ‘ The gift of Wm. Briggs, Mayor, for the use of the Mayoress of Lancaster, 13th August, 1914.