A Lancaster Camp in the Lune Valley.

On Sunday morning the troop attended service at the Hornby Parish Church. The Vicar (the Rev. E. L. Mather), in his sermon, gave them a welcome.

S.M. Tapp laid a wreath (made by Mr. Hargreaves of Lancaster) on the war memorial; a large number of visitors including the Rev. H. Robinson (Chaplain to the Troop) attended.

Sports were held on Wednesday before a large number of Lancaster visitors, prizes being presented by Mr. Joseph Towers. An ambulance display, Scouts rally and fire drill were also gone through.

The boys thoroughly enjoyed a visit to the Hornby Castle estate permission being kindly given by Mr. C. W. Foster.

A refreshment stall was run by ladies of the Scouts Committee and over £5 was taken on visitors’ day. The canteen was run by the boys. At football the Scouts beat the Institution boys 15 goals to 3, and Hornby youths by 4 goals to 2. The boys showed their true scouting spirit during the wet weather. The camp itself was a huge success and Mr. Joseph Towers and family, and staff deserve great credit. 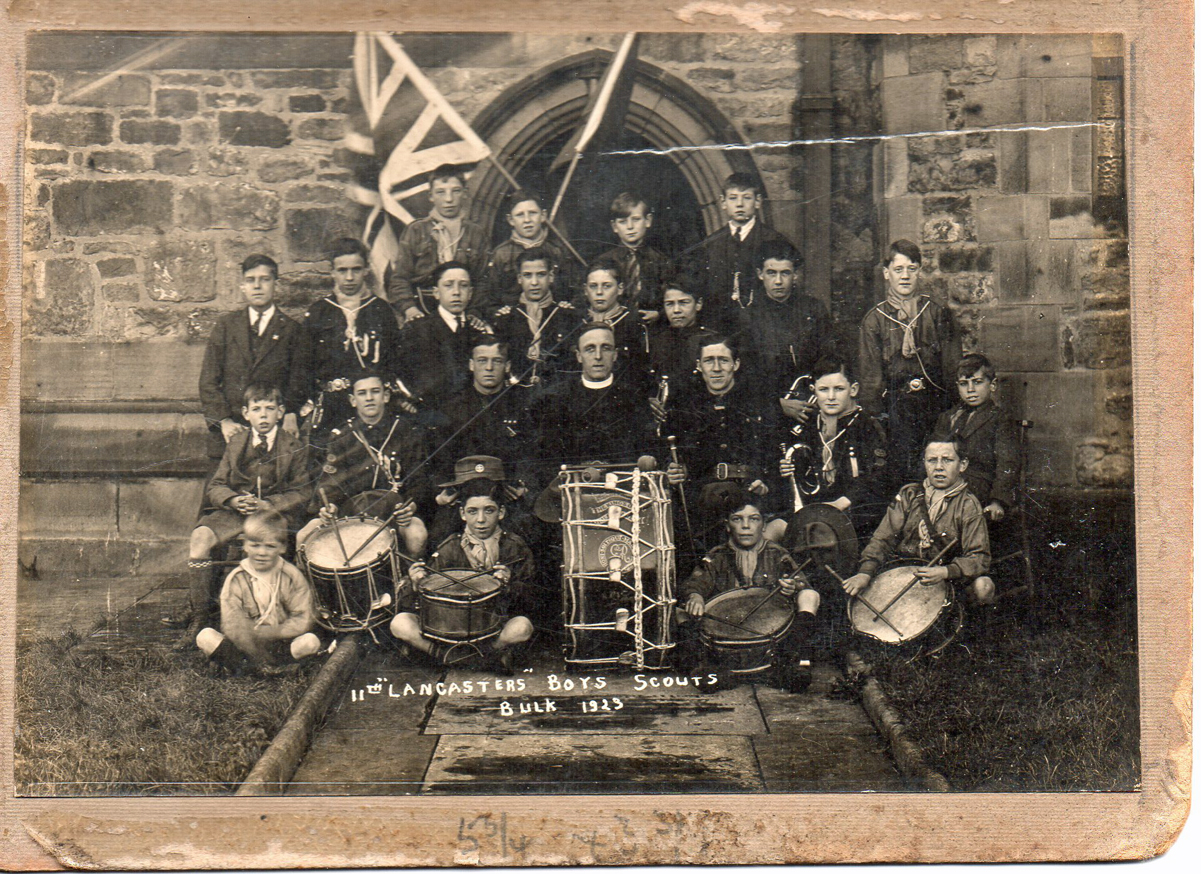 The 11th Lancaster Troop of Boy Scouts spent a most enjoyable time in camp at Skelwith Bridge, Ambleside.

The camp was under the direction of the Scoutmaster (Rev. E. Shufflebottom). He was ably assisted by Assistant Scoutmasters J. Renshall and J. Denwood.

The situation of the camp was ideal. Amidst the picturesque Lakeland scenery the boys enjoyed every moment of camp life. The camp was close to Ambleside, Hawkshead, Coniston and well-known mountain peaks. The Langdales were but a short distance away.

The afternoon and evening were given over to games etc. A bugle call was sounded for every parade.

The following trips were arranged for the Troop: (1) Motor ride to Coniston, lunch at Coniston and trip up Coniston Lake, climb the famous crags. (2) Route march to Ambleside. Trip (3) on motor launch up Lake Windermere.
Thanks to many kind friends the boys had an excellent time. The gifts to the Troop stores included cakes, boxes of of kippers, sack of potatoes, eggs etc.
The breakfasts of porridge, eggs and bacon, the dinners of roast beef etc. and the Friday night feast  . . . potatoes and pancakes will long be remembered by the Bulk Boy Scouts.
Sharples motor lorry conveyed the boys to and from the camp.

* Ernest Shufflebottom was born 26 August 1896 in Manchester, a son of William & Susan Sarah Shufflebottom nee Lipscomb. In 1911 the family was living at Westwood, Baxter Road, Sale when William’s occupation is given as Wholesale Glass & China & Earthenware Merchant with premises at 278-284 Oldham Road, Manchester.

Ernest married Jessie Mary Smith at Abbey Church, Thorney, Cambridgeshire in 1922. The local newspaper the Peterborough Standard noting that he was then Curate at the Parish Church in Lancaster and he also saw service in the Army.

In 1939 Ernest & Jessie are living in the Vicarage at Bolton le Sands. Ernest is a Minister of Religion. Newspaper articles also show that the Rev. Ernest had been inter alia at Caton in 1928 and Bolton le Sands between 1938-1956. He travelled to Seattle, USA in 1951 on a 2-year exchange scheme sailing on the ‘Britannic’ from Liverpool on 6 April 1951.

William Shufflebottom’s Obituary – 22/1/1932 – Manchester Guardian
Mr Shufflebottom who died Saturday last was in his 78th year. 68 years ago Mr Shufflebottom, then aged 9, was left to his own resources by the death of both his parents.
He commenced his working life as an itinerant vendor of glass, china, and earthenware, visiting the various markets and fairs in the Manchester district.
He had sufficient capital at the age of 25 to open a small shop and 10 years later moved to Oldham Road in Manchester. He then went “wholesale” and in 1912 he assigned the business to two of his sons. He retired in 1924. William Shufflebottom and Sons Ltd was the biggest business of it’s kind in the country.
He was Churchwarden of St. Barnabas’, Oldham Road, and since 1910 a pewholder at St. Pauls Church. He is survived by three married sons.