THE 1st Carnforth Group of Boy Scouts has sustained a further loss by the news received by his parents that Sergt. Ken Keenan has been killed in action on March 26th.

Ken Keenan was called up prior to the war and joined the Royal Artillery. Since then he had always been in the thickest of the fighting, first, in France and Dunkirk, and later in the Eighth Army during its most critical periods In North Africa, following on with them into Tunisia, Sicily and Italy.

He was first of all a member of the Scout Group in Carnforth almost at its inception and when a Rover Crew was formed in 1937 he was honoured by the members electing him as First Rover Mate. A keen Scout and Rover, Sergt. Keenan attended annually the summer camps in Ireland and elsewhere. He always took a prominent part in Group activities, assisted to erect the Capenwray Rover Den, played football, was an accomplished accordionist, playing at local concerts and the annual Gang Shows produced by the Scouts before the war. He was of an unassuming disposition. His loss is deeply felt by the leaders and members of the Group as he had maintained contact with the Group right through the war. Rover Scouts extend sympathy to his parents who formerly lived in Carnforth and are now in Slyne Road, Lancaster.

Kenneth Keenan was born 1918 in Carnforth, son of Denis Keenan and Gladys May nee Cameron (born 1898 Tredegar). In 1939 the family was living at 2 Newby Drive, Lancaster. Denis is listed as a (Cotton) General Labourer.

Ken was an elder brother of Tony Keenan.

According to the CWGC website Ken, age 25, of the 132 (The Glamorgan Yeomanry) Field Regt. is buried in the Cassino War Cemetery, Italy. He was the son of  Mr. and Mrs. D. Keenan, of Lancaster.

Carnforth born and unmarried, his girlfriend was in the Land Army. He was a keen Boy and Rover Scout with the 1st Carnforth Scout Troop; an accordionist and accomplished swimmer. His brother Tony, currently trains long distance swimmers for record attempts including a recent three way swim of the English Channel and was awarded a Royal Humane Society bronze medal for saving two people at Grange in January 1945. His parents, Mr. and Mrs. D. Keenan moved to Newby Drive in the late 1930’s and took an active interest in parish affairs.

At this stage of the war the Italians had changed sides, and the Germans were holding the ‘Gustav Line’ of fortified positions across the spine of Italy, south of Rome. The allies attempted to outflank this line by the landings at Anzio (See J. Prickett), and penetrate it via the strongly defended Benedictine Monastery at Monte Cassino. Allied bombing of this ancient monastery (15.2.44) has been a source of bitter controversy ever since. Firstly because the Germans claimed it was not being used for military purposes until after the bombing, and secondly because the bombing gave the Germans an excuse to occupy the site; which was an excellent observation post and provided better cover for the occupying forces; than the complete building. Many Allied veterans hold that the Germans were lying and the bombing did much for the morale of troops who were attacking this immensely strong mediaeval fortress at the top of a steep mountain crag face.

Four bitter battles took place between 17th January and 22nd of May 1944, during which Polish troops cleared the last remnants of German Paratroopers from their foxholes in the ruins of the monastery on the 18th of May; at a total cost of 115,000 Allied and 60,000 German casualties. The Germans began to withdraw on the 17th of May, and could not prevent the Allied break-out from Anzio which brought about the joining of elements of the Cassino attackers with those landing at Anzio on May 31st. . . 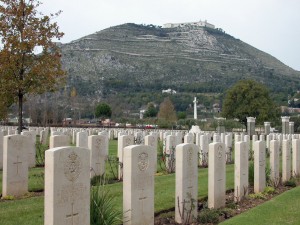