THE 5th Lancaster Sea Scouts have just come to the age of one -their first year is completed. They were organised in August 1943, as a group of six boys, under the care of the G.S.M., Mr. B. Toole*, and S.M. the Rev. J. Conway. Training commenced with the aid of the 21st P.L.’s. Soon, further recruits joined the group, which now has a membership of 25 Sea Scouts and 30 Cubs.

At first it was the old story of hard going, but during the winter months, fairly good progress was made. Then it was decided to begin an intensive course in preparation for Admiralty recognition, and so joining forces with the 21st Lancaster Sea Scouts, a series of lectures was arranged in the 5th H.Q. at the Cathedral School. Dr. Mather and Mr. Mountain very kindly offered their services for First Aid and Signalling Courses. With this additional help, things began to move rapidly. The Admiralty sent Commander Rossetter to take the inspection, and as a result the two troops are now recognised as the 82nd Admiralty Unit,

The official report reads as follows:- ” First inspec­tion for Admiralty recog­nition – Most of the boys were under 15 years of age. Their smartness and general bearing on parade were very good. The training is on sound lines and of a high standard for such a junior Sea Scout unit. Their training quarters and equip­ment, including several boats, which are in excellent order, are ideal for training of ‘ Y ‘ Scheme potential entries. This unit carries a definite, air of efficiency, and is worthy of Admiralty recognition.”     Comments on the unit’s proficiency included the following: Compass, very good; Rule of Road, good; Bends and Hitches, very good; Drill (physical), very good; Physique, very good; Semaphore,  very good; Morse, excellent; Squad, very good; Smartness, very good; Pilotage, very good; Games, very good; First Aid, excellent; Boatwork, very good; Building and Repair, very good; Officers and Instructors, excellent; Keenness and Interest of Sea Scouts, very good indeed.

As a result of this recognition, the 21st and 5th, have an Admiralty parade at least once a month, and plans are now being formed for the approaching Winter course. In addition to the above work, the 5th have now 12 Second Class Scouts and 13 Tenderfoot. 26 being the total of badges for the year. The Cubs too are making excellent progress.

There have been many social enterprises during the year, for which the boys worked very hard. A concert, sale of work, jumble sale, etc., which cer­tainly proved a sound financial undertaking and enabled the troop to provide themselves with a properly equipped Cabin as G.H.Q., its port holes and storm lamps certainly giving it a nautical touch. A boat-house and slipway were set up on the canal near Dry Dock. with the valuable assistance of Mr. Foxcroft, to whom members of the troop are very grateful. Three canoes and a dinghy were pur­chased, and one in commission as is also one that has been kindly lent to the troop by the Rev, C. R. Ridley. Tents and camping equipment, have been bought. and a cabin for week­end camping. So that from all angles the troop is now well set up.

The first camp was held at Grange during August Bank Holiday Week, 23 being present. All seemed to enjoy it, and the weather was certainly all that could be desired. Boating, swimming and games were the order of the day, with endless potato peeling and boiling “dixies.” Instructions were also given in Scouting, Seaman-ship, First Aid and Signalling. A notable feature of the week was a very gallant effort by Tony Keenan in saving a young lady from drowning.

Thus has the first year ended. Mistakes have been made, but lessons have been learnt. With the Winter approaching much hard work lies ahead. So, go to it, the “Fifth.

What doth the Lord require of thee, but to do justly, and to love mercy, and to walk  humbly with thy God? – Micah 6:8

TONY KEENAN, a 13-year-old member of the 5th Lancaster (St. Peter’s) Sea Scouts last evening received from the Mayor (Coun. W. T. Grosse) the highest honour which can be awarded in Scout­ing, the Bronze Medal, in recognition of his bravery on August 7th, when he effected the rescue of a young woman from drowning and also assisted her companion who was also in difficulties to reach reach (sic) shore. 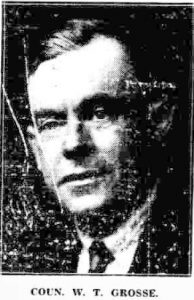 The circumstances which led up to the award of the “Scout V.C.” to this young hero, whose parents reside in Sulby Drive, were described to a large and representative audience at the Town Hall. The Mayor presided, and he was accompanied by County Commissioner T. W. Helme, District Commissioner J. Dodds Drummond, and Dr. J. A Tomb. Chairman of the local Boy Scouts’ Association.

Rev. Father Conway, who was in camp with Tony and the troop, stated that they were about to get tea when Mr. and Mrs. Keenan, who were sitting on the bank on a tidal part of the river, at a point where the water was 17ft. deep, noticed one of two girls. who were bathing, had got into difficulties. They called for Tony, who responded immediately. He went to the girls’ aid and was struggling to get her to the bank when her friend who had also swum out, began to struggle. Although he had been pulled under the water several times, he got both girls to the bank. “I would like to say to him now as I said to him then ‘Well done. Tony,” concluded Father Con­way.

Mr. Helme said “I never felt so thrilled as I do this evening,” and Mr. J. Dodds Drum­mond described the occasion as the most auspicious for Scouts and he hoped for Lancaster.

Pinning on the medal and also handing to Tony his badge and the citation of the incident, the Mayor said his was a very brave act and was a noteworthy example of the value of the life-saving train­ing given to Scouts.