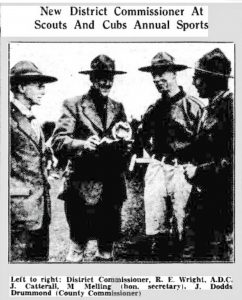 AT the annual Scouts’ sports at Woodhill Lane on Monday night, 5th Morecambe won the silver trophy.  Cub sports were also held on Monday night, postponed by bad weather from the previous week .  Winners of the Association Shield where 16th pack, with 33 points.  The newly appointed District Commissioner, Mr. R. E. Wright, made the presentations.

It was a chilly evening for athletics with a keen wind and threatening rain, but the huddled crowds of parents and scouts soon found that the excitement of the pole vaulting, high jump and other events distracted their minds from the weather.  The junior high jump was remarkable for the nimble jumping of the 11 and 12 year olds, who did their stuff with eagerness and skill scarcely expected.  In addition to the 100 yards sprint there were quarter mile races for the 11- 12 years and the 13- 14 years, and a half-mile for the senior Scouts over 15, and it was a grand sight to see the seniors racing home at top speed.  The relay race was another which was packed with excitement as the changing fortunes of each team’s six runners brought the 5th Morecambe first home in a close and hard fought finish.

It is doubtful whether anything can dampen the enthusiasm of a gathering of Scouts and on Monday there was much shouting to be done, running from one event to another, congratulations to be given and encouragement for the competitors and all these call for cheering and shouting, and if there’s one thing scouts like more than another it’s cheering and noise.

As I’ve already said the winners were the 5th.  Second were 4th Morecambe Sea Scouts, who won the trophy last year when the sports were held indoors, they gained 18 points.  Third were the 11th Morecambe with 14½ points.

The cubs were also having a grand time, small boys in their green woolley pullovers and brightly coloured kerchiefs thought it was the night of nights.  They darted excitedly from one event to another, first they were spectators at the Scouts events, and then competitors in their own. They frolicked over the ground never still a moment.  They had more humourous events, including the three-legged-race always the cause of great hilarity, the egg-and-spoon, sack race and others.  The winners were the 16th Torrisholme pack, 7th pack were second with 28 points.  They won the shield last year.

After the presentation, a cheer of thanks was given to the groundsman Mr. Ferguson who had set out the tracks so efficiently .

Some of the 4th and 8th Sea Scouts joined a party of GPO workers for a walk across the Bay on Sunday.  They set off in the afternoon from Hest Bank and crossed over to Grange. They were fortunate in having some of the best weather that we have had for some weeks.  It was a lovely warm day and they all enjoyed a novel experience.  Some of them had already been across with the Rotary Club, but to most of the Scouts it was the first crossing.  Two of the 8th Morecambe Senior Scouts, Harrison and Crabtree were not just content in walking across they hiked back home.